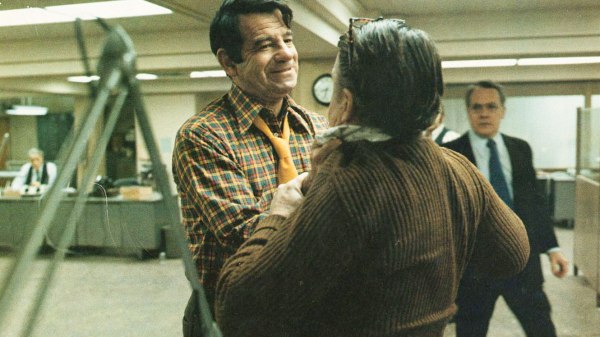 Take the crisp elegance of a ‘60s heist film like “Rififi,” combine it with the shaggy, gritty charm of a ‘70s New York crime film like “Dog Day Afternoon,” and the result is the 1974 classic “The Taking Of Pelham One Two Three.”

The Joseph Sargent film starring Walter Matthau and Robert Shaw seemed to be on TV as the late movie every week when I was growing up, and with good reason. It is just endlessly rewatchable, somehow working as both a gripping suspense thriller and a wry comedy. Kino Lorber Studio Classics released an excellent, extras-packed Blu-ray version this month, and while part of me misses the WGN Late Movie theme song during the commercials (okay, a very small part), it’s essential viewing.

On an ordinary day in New York, four machine-gun wielding thieves hijack a subway train deep in the bowels of Manhattan. A cat-and-mouse game ensues via radio between the leader of the gang, the cool and confident Mr. Blue (Shaw), and Transit Police Lt. Vincent Garber (Matthau), who is anything but cool in his rumpled shirt and banana-yellow tie, but just as wily as his adversary. Matthau was a on a strange but delightful run of leading-man roles at the time with “The Laughing Policeman” and “The Bad News Bears.”

Sargent and editor Gerald Greenberg beautifully crosscut between the tension in the subway car and the tension in Garber’s office, each side trying to outmaneuver the other. The film also expands to show us the city’s Ed Koch-like mayor (Lee Wallace) and police, painting a portrait of a bygone New York, not the rich corporate playground it is today, but a dirty, ailing city on its knees. Just listen to the Noo Yawk accents in this film – nobody talks like that in the city anymore.

The Kino Lorber Blu-ray features interviews with Greenberg, Hector Elizondo (who plays the loose cannon of the gang) and David Shire, who wrote the film’s iconic, percussive score, one of the best of the decade.

But the jewel of the extras is a commentary track by brothers Jim Healy, director of the Wisconsin Film Festival, and Pat Healy, a filmmaker and character actor (“Cheap Thrills,” “Compliance.”) It’s billed as a “fan commentary,” and the brothers certainly are big fans – Jim recalls watching the film over and over on a VHS tape dub in the 1980s.

But it’s also incredibly informative and insightful, as the brothers make connections between other films of the era, drop quick biographical sketches of all the supporting actors, and point out things that a casual viewer might miss. Pat notes how the edgy rapport between Matthau and Shaw is fueled in part by their very different acting styles, recreated by Alan Rickman and Bruce Willis so memorably in “Die Hard.” And Jim goes into detail on where the film deviates from John Godey’s  novel and where it stays faithful.

It’s really a fun listen and a worthy complement to a film that you can watch over and over again. We’ll miss our WGN late movies and VHS tape dubs, but Kino Lorber does a great movie justice with its “Pelham” release.