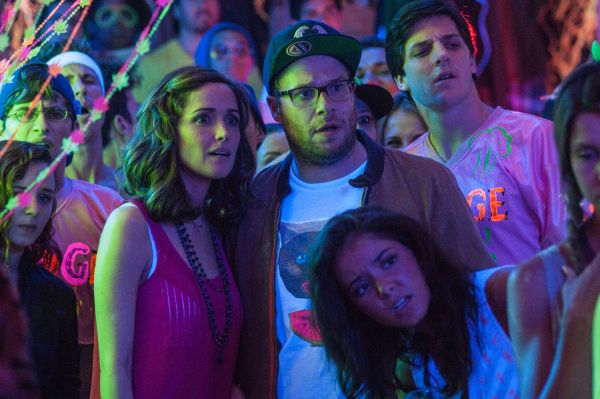 The marketing department at Universal Pictures must have flipped out when they heard about the premise of “Neighbors.” A fraternity house living next to a house with new parents? They’d be able to get both college students and twentysomething couples on date night in the theater on date night!

Its demographic double play aside, “Neighbors” is very good at blending its two kinds of comedy — frathouse raunch and new-parent angst — together into a tight and consistently funny package. Slyly, the film draws connections between the two houses — new parents Mac and Kelly Radner (Seth Rogen and Rose Byrne) secretly crave their old wild lives, while the boys at Delta Psi look at their brotherhood as a sort of stable home environment. Just a stable environment that uses “bros before hos” as its mantra.

Frazzled from sleepless nights with their infant daughter and desperate to get out of the house (“Baby’s first rave” is an idea that’s considered and then discarded), Mac and Kelly are conflicted when Delta Psi moves into the house next door. On the one hand, they don’t want to lose what sleep they can get to the sounds of Skrillex booming from next door, but they want to seem cool about it. (They even have to practice saying “Keep it down” in kind of hip, offhand way before they go over to introduce themselves.)

Frat president Teddy (Zac Efron) and veep Pete (Dave Franco) at first seem nice, and co-opt the couple by inviting them in for an all-night party. But eventually the neighborliness wears off, the cops are called in, and the two houses get into an escalating war that involves hidden airbags, burst water pipes, and a Robert De Niro theme party. (Frat guys are more creative than I had imagined.) 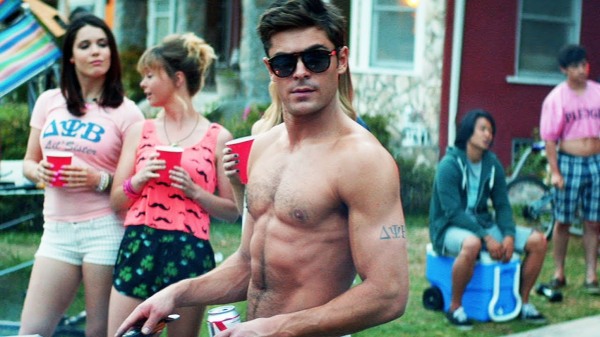 With Rogen starring and producing, “Neighbors” exists very much in the Judd Apatow universe, where raunchiness and sweetness are two sides of the same fluid-spattered coin. (This time around, the fluid is breast milk.) But unlike Apatow, Stoller, who also made the strong “Forgetting Sarah Marshall” and “Get Him To The Greek,” really knows how to cut a comedy within an inch of its life. At 96 minutes, “Neighbors” moves along briskly without a seemingly wasted shot, keeping the energy level percolating.

That’s especially true in the scenes between Rogen and Byrne, where the dialogue is pitched just a little faster than normal, and Stoller cuts rapidly between each of them on every line. The effect is sort of exhilarating, and shows that while Rogen and Efron are very funny, the film’s real secret weapon is Byrne.

Byrne was good as the “perfect friend” in “Bridesmaids,” but she’s fantastic here, her character free to be just as funny and irresponsible as her slacker husband. Usually in a comedy, such as every Adam Sandler movie, the wife character would be beautiful but humorless, there to laugh and gently scold her husband’s zany antics. The film even has a meta moment about that dynamic, where Rogen says, “Haven’t you seen a Kevin James movie? I’m the dumb guy, and you’re the wife who tries to stop the dumb guy from doing dumb things!”

“I have a little Kevin James in me too!” Byrne responds. Like “Bridesmaids,” “Neighbors” is another welcome step forward in tearing down the “bros before hos” mentality of so many studio comedies.