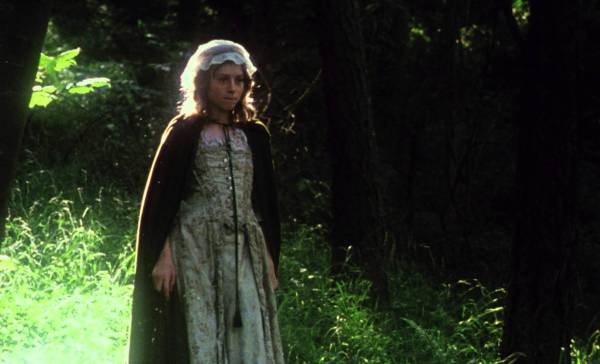 Sean Weitner weighs in on Ken Loach’s “Black Jack.” It plays a second time at the Wisconsin Film Festival on Thursday, April 10 at 4 p.m. at Sundance Cinemas.

“Black Jack” is the forgotten third feature of British director Ken Loach (“The Wind That Shakes the Barley,” “The Angels’ Share“), released in 1979 and based on a 1969 children’s novel of 18th century adventure. It’s a doozy.

There are few movies, particularly those that are ostensibly children’s entertainments, that are as peculiar as “Black Jack,” which begins with the title character (a hulking Jean Franval) surviving a hanging and essentially kidnapping young Tolly (Stephen Hirst, in his only film role) to help him escape and recover. The spine of the story turns out to be that Tolly has to convince the equally young Belle (Louise Cooper, also in her only film role) that she does not have a family history of madness.

Why? As the film opens, Belle’s parents have decided they don’t want to cope with her or have her drag down their social standing — they claim she had a break from reality after suffering a high fever, but she may just be a moony, dreamy kid. Having declared her mad, they send her to a madhouse, in a time and place where madness is so stigmatized that when she meets Black Jack, who is at least four times her size, even he is scared that she might be possessed of such strong lunacy as to be a physical threat to him. Further, the conventional wisdom is that madness is only conquerable if it isn’t hereditary. So when the plot contrives to throw the family’s sanity into doubt (for reasons besides, you know, discarding their child), Tolly quests to prove that they aren’t mad so Belle can grow up happy and without stigma.

Because modern viewers know that the characters of 200 years prior are misrepresenting mental illness, most filmmakers would season this storyline with a somewhat more contemporary conceit — he has to convince a magistrate that she’s not mad in the next 12 hours so that they can leave on his uncle’s ship, for instance. A classic clock-oriented approach could shift the storytelling burden to get around the fact that we know the characters’ concerns to be a product of long-since-debunked superstition.

Loach doesn’t offer that. There is no winking here, and no concession; you live and die by his characters’ superstitions. In this deprived Georgian-era England, no ironic commentary is offered on the behavior of Belle’s family, on the plain thievery of the doctors, of the infuriating indecency of the madhouse, on the snake-oil ridiculousness of Tolly’s eventual benefactor Dr. Carmody (Packie Byrne). All such judgments are your own: This is a guileless movie that feels truly anti-modern, both a higgledy-piggledy picaresque in violation of commercial conventions, and an absurdly overplotted tale full of novelistic contrivances necessary to put the screws to Tolly and Belle.

For those reasons, it is weird and wonderful, a masterpiece of naturalism in both its setting and its casting of non-professional actors. Environmental detail tells us most of what we glean about this world, but Loach isn’t at all fussy about making sure you catch specific details; watching “Black Jack” is immersion learning.

We learn how cities work from how Black Jack’s hanging is shot — a pastor against the wall, drowned out by the clamor of the crowd, the condemned barely warranting particular attention … and then a widow tries to make a buck by snatching his body and reselling it. Loach presents Carmody as working some pretty cheap sleight-of-hand on his customers, stuff that’s patent and unconvincing to our eyes, but still crowd at the traveling carnival eats it up. (Byrne’s subtle mugging as he sells his wares against his better judgment is a rare example of the film striving for something as easy as a punchline.) The asylum doctors, well-dressed, in well-appointed rooms, easy to corrupt, easy even to make co-conspirators to manslaughter — their story is told without dramatic lighting, tense music, explanatory voiceover, or any such thing.

Instead, the movie pretends to be merely capturing the events taking place in front of it, with little seeming attention paid to the verities of classical filmmaking. Meaning is rarely constructed in editing within a scene; instead, everything unfolds in the frame or just offscreen, as a play might. As a work, it is nearly naïve — like Belle, a holy fool but far from mad.