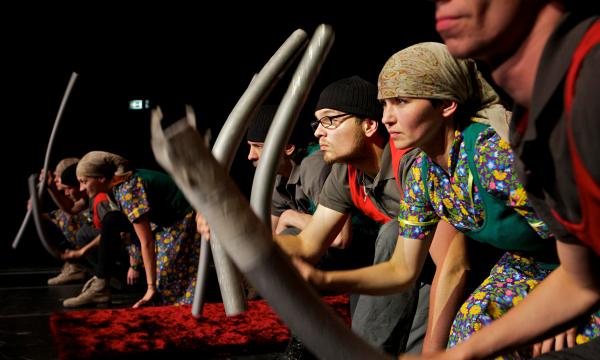 The Wisconsin Film Festival starts on Thursday, April 3, and we’re zooming in on one of the many films that still have advance tickets available via wifilmfest.org. Today, Sean Weitner takes a look at “Dangerous Acts Starring the Unstable Elements of Belarus.” Make sure to check back to Madison Movie for daily coverage throughout the eight-day festival.

Neither screening of this documentary has sold out, so heads up: You can still get a ticket to what could be *the* chatter-churning title of the festival. As a piece of filmmaking it’s commendable, though not sensational, following the life and (especially) work of Belarus Free Theatre, a guerrilla avant garde troupe hounded by “the last dictatorship of Europe,” that of Alexander Lukashenko. Their work is imagination as protest, protest as art, art as guillotine. It’s agitprop to engage both sides of #wiunion, because who can’t root against Lukashenko?
The powder-keg heart of the movie is Belarus’ 2010 election, painted as a total sham. Director Madeleine Sackler uses smuggled-out footage to show the theater’s covert activities in the months leading up to the election: selling tickets, meeting audiences in public to sneak them back to the theater, and staging cri de coeur performances about life under totalitarianism as the death of a thousand cuts … or fewer. (One troupe member, upon her arrest, is told, “Everything that Nazis did during World War II would be just a dream for you.”)

Then comes the election results and the thousands who protest in the streets, an aftermath that makes refugees of the troupe — although while in exile they earn an Obie and Edinburgh Fringe Festival award for shows that only get better and more heart-in-your-throat. (The actors are, to a person, excellent stage and screen presences.) In the third act, we return to Belarus with another to-the-streets protest and its even more frightening response — reportage as worthy as the stagecraft.

Much of the Theatre’s work is visually striking; sometimes Sackler enhances this quality through her own staging, and sometimes she has slow-motion footage of the troupe walking eight abreast through shadowed archways. But for everything that’s a little corny, there are also very canny assemblies — rehearsals shown after performances, or performances contrasted with later revisions, and there’s a subplot about an actor’s daughter that stings. The movie is more than just a tripod placed in front of its subjects, occasionally but rarely achieving the heights of its subjects’ artfulness.

Although, as noted earlier, who can’t root against Lukashenko and his KGB thugs? The troupe presents questions that are not complicated, and so, in its way, the movie is a rout, the story of people waiting patiently for history’s pendulum of justice to swing their way. (Spoiler alert: It hasn’t.)

As such, this is equal parts document and sign-our-petition propaganda, but dammit, you’ll want to sign their petition.