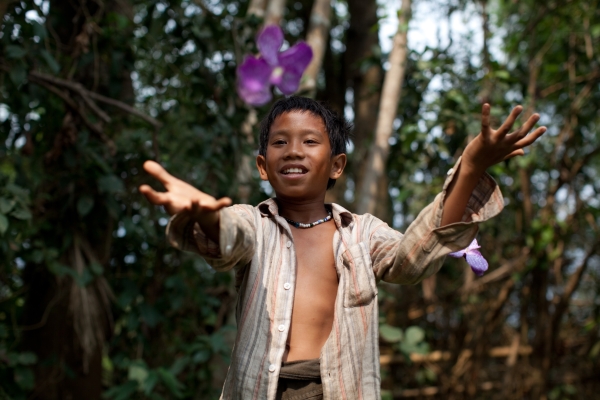 Tickets for the 2014 Wisconsin Film Festival went on sale March 8, and each day between now and the start of the festival on April 3, I’ll be zooming in on one of the more than 140 films playing at the festival. If you have suggestions about films you’d like to know more about as you’re planning your festival experience, let me know in comments.

It’s little wonder that “The Rocket” has won the audience award at multiple festivals, because it’s struck fresh from the “festival award winner” template. Plucky young Ahlo (Sitthiphon Disamoe) is ousted from his indigenous village by Progress, deposited with his family in a truly impoverished shantytown, befriended by outcasts including a dancing machine dubbed James Brown (Thep Phongam), and forced to compete in a local rocket-building festival in order to win the cash prize that will stop his family’s downward mobility slide.

Do we get an ethnographic tour of an underrepresented nation? Yes, and this time it’s Laos, seen through the viewfinder of Australian film school grad Kim Mordaunt. Is the photography (to run down the checklist) beautiful, lush, vibrant, breathtaking, and stunning? Very much so, courtesy of Kiwi cinematographer Andrew Commis. Does a village elder harrumph against the possibility of relocating by interjecting, “And leave our traditions behind?” She does. Do village superstitions put Ahlo behind the social eight ball, and does the rocket launch double as a rain dance? Yes and yes. And does Ahlo build the bestest rocket?

Well, spoilers, but don’t look at the poster too closely. “The Rocket” knows what it’s selling, and its audience knows what it’s buying. If this sounds like your idea of a good time, it is.

If this sounds like the sort of thing that might give you an allergic reaction, but you end up seeing it anyway, look forward to Disamoe’s performance, which vibrates with the unaffectedness of youth from his first frame. As his parents, Alice Keohavong and Sumrit Warin don’t have long to convince you that the village’s agrarian life was something that might content well-adjusted adults. But they do, giving you a yardstick with which to measure their later grief.

Other promising gambits don’t pay out. There’s a chase scene intercut with a dance sequence that’s more than a vapor but not quite a gas. Ahlo is supposed to be a mechanical adept, a detail that lends itself to visual storytelling, but we only see it shorthand. Occasional flirtations with expressionism quickly get married, have kids and become classical storytelling.

And there’s nothing wrong with that. In the film’s big rocket launch finale, three fates await the villagers: Their rockets can soar, or get some good height before tapering off and quietly disappearing, or explode in their faces. Then it turns out there’s a fourth option — doing something so much better than soaring that it relegates anything else to runner-up.

There’s an analogy to film fests here, and clearly a lot of audiences think “The Rocket” opens their personal door no. 4. But it’s more fitting to say it’s built like one of the runners-up, giving audiences what they’re accustomed to wanting, instead of overshooting the standard and making them see stars.