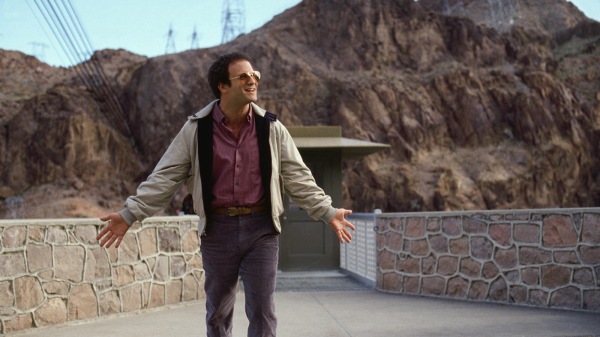 In a new interview that’s one of the bonus features on the new Blu-ray Criterion Collection edition of “Lost in America,” Albert Brooks is asked about being cast as a villain by Nicolas Winding Refn in “Drive.”

Brooks says that Winding Refn first saw “Lost in America,” it scared him. He was particular unnerved by the anger in Brooks’ performance, as advertising executive David Howard who tries to “drop out” of society comfortably (in a Winnebago, with a comfortable “nest egg”), only to face real financial ruin when his wife Linda (Julie Hagerty) gambles away that nest egg.

It’s odd at first to think of Brooks’ performance as a scary one. But while watching the Criterion disc, I happened to mute the sound during the scene where David is excoriating his wife for losing all that money. And without hearing Brooks’ great, funny dialogue, without hearing him refer to a nest as a “round stick,” it really is startling how angry he is at his wife.

It’s an anger that comes from fear, a fear that we laugh at because we recognize it so deeply. “Lost in America”is one of the best comedies ever made. And it’s also a horror movie.

END_OF_DOCUMENT_TOKEN_TO_BE_REPLACED

Pick of the week: “Lost in America” (Netflix) — Albert Brooks fan rejoice, as Netflix is now streaming all the comedies he wrote and directed. Maybe give a miss to “The Muse,” but there are some comic masterpieces here, including “Defending Your Life,” “Modern Romance” and this 1985 gem  starring Brooks and Julie Hagerty as an upwardly mobile couple who decide to “drop out” of society, only to find life out of the rat race isn’t so comfortable. Even in a top-of-the-line RV.