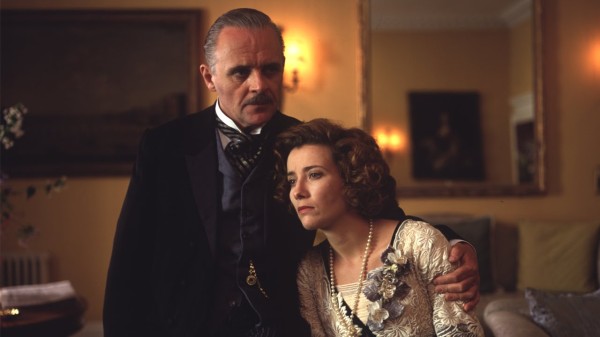 Thank goodness Britain has such a rigid class system, or else its novelists and playwrights (and filmmakers) wouldn’t have such rich material to work from.

That’s certainly the case with “Howard’s End,” the Oscar-nominated 1991 adaptation of E.M Forster’s  panoramic 1910 novel that goes up and down the rungs of England’s social strata, from the top to the bottom and back again. We see how each class views the other. The top looks down (“The poor are poor, one is sorry for them, but there it is,” remarks wealthy industrialist Henry (Anthony Hopkins)) and the bottom looks up (“If one is rich and fails, one can simply try another profession,” says destitute clerk Leonard Bast (Samuel West). “For the rest of us, if you lose a position by the age of 20, you’re done for.”)

The film was released in 2009 in a now out-of-print Criterion Collection edition, and has now been re-released in a 4K digital restoration that played at Sundance Cinemas in Madison, and is now out on Blu-ray from the Cohen Media Group. All of the extras from the Criterion version, including two featurettes about the production design of the sumptuous film, have been carried over, along with several Q&As featuring director James Ivory from the film’s 2016 theatrical revival.

“Howard’s End” represents a certain kind of British filmmaking – precise, elegant, refined  – that young filmmakers like Steven Frears and Danny Boyle found themselves rebelling against, thinking them backwards-looking. But with “Howard’s End,” one can be distracted by the pretty hats and vintage motorcars for only so long before getting swept up in the drama, and see its relevance to today.

The film looks at two families at opposite ends of society. The Wilcoxes, Henry and Ruth (Vanessa Redgrave), are wealthy industrialists. The Basts, Samuel and Jacky (Nicola Duffett), are just squeaking by on Edward’s clerk’s salary, and then spiral downward when he is laid off. There is a surprising connection between the two couples that only surfaces late in the film.

Caught in the middle are the middle-class sisters Margaret (Oscar winner Emma Thompson) and Helen (Helena Bonham Carter).  Margaret is a kind woman who befriends the ailing Ruth. Helen is a rabble-rouser who defends the failing Samuel.

When Ruth dies, she bequeathes to Margaret a cottage known as Howard’s End. The Wilcoxes aren’t using the house for anything other than storage, but are outraged that Ruth would give the house to someone outside the family, and discreetly throw her handwritten will into the fire. Margaret ends up marrying Henry and gets control of the house anyway.

Meanwhile, the marriage estranges the two sisters, especially when Helen tries to get Henry to help the Basts. There’s probably a metaphor for there for a disappearing middle class in the way the sisters are pulled apart, one gravitating towards the rich and the other towards the poor.

The film is much like Hopkins’s performance – polite and genteel on the surface, but seething with emotion and secrets underneath. Screenwriter Ruth Prawer Jhabwala (a longtime Merchant-Ivory collaborator) elegantly balances this large cast of characters, giving each just enough weight and empathy and no more. The turns that the story take are both surprising and inevitable given what we learn about the characters.

After such turmoil, the film returns to Howard’s End for the climax, and it’s clear this cozy but rundown country house represents the future of England itself. Forster presents a lovely if unlikely solution to its class struggle, presenting a place in which all three classes have found a compromise that suits them all. It’s nice to think that’s possible.