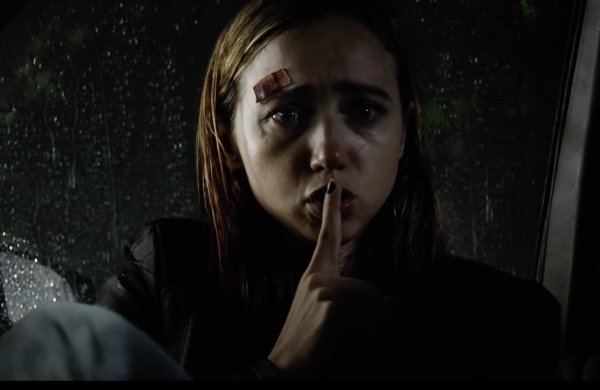 “The Monster” is now playing at AMC Desert Star in Baraboo. R, 1:32, three stars out of four.

You’d be forgiven for thinking initially that the title character in Bryan Bertino’s horror film “The Monster” was a mother. Kathy (Zoe Kazan) is a spectacular trainwreck of a single parent, channeling her frustration and anger with her situation into substance abuse and screaming fits at her 12-year-old daughter Lizzie (Ella Bellentine).

In the opening scene, we see Lizzie listening to a sad country song as she cleans up the wreckage of one of Kathy’s benders, picking up beer bottles and pouring out ashtrays. Kathy is supposed to drive Lizzie to her father’s house for an extended (perhaps permanent) visit, but she oversleeps, and the bickering duo gets a late start on the road.

That turns out to be a very serious mistake.

Bertino, who made the well-received 2008 home-invasion horror movie “The Strangers,” takes his time developing this fractured mother-daughter relationship and its tensions. Sniping at each other, side by side in the front seat of the car, Kathy and Lizzie seem less like parent and child than two arguing sisters.

Out on a rural road late at night, rain cascading down in sheets, their car hits an animal. The creature is a large wolf, and the collision damages the car. While Lizzie and Kathy sit in the car and wait for a tow truck, they start to wonder: What was the wolf running from?

“The Monster” becomes a lean, brutal and very effective horror movie, with mother and daughter trapped in the car while something lurks outside. Bertino efficently uses the contrast between the confined space of the car and the gray emptiness outside, carefully parceling out glimpses of the creature and clues as to what it might be. There’s an excruciatingly suspenseful sequence where a tow truck operator (Jesse Douglas) lies underneath their car while Lizzie and Kathy try to warn him that something is stalking him.

Things get pretty bloody and shocking, satisfyingly so for horror fans, and the film uses practical old-school visual effects with no CGI. Bertino resolutely keeps the relationship between mother and daughter in the foreground as they try and stay alive. He works in numerous flashbacks to the family’s turbulent earlier life (including a cameo by Scott Speedman of “The Strangers” as the father) to show just how much they’ve already survived.

But at some point, those flashbacks aren’t necessary, both because they break up the tension of the film and because Kazan and Bellentine are so good at conveying that shared history with a look or a cutting line. Kazan, in particular, who usually doesn’t play this sort of role, is very good as showing Kathy’s self-loathing, seeing her daughter as the living embodiment of all her bad decisions, and then finally and fiercely accepting her maternal instinct.

We’re coming up to the end of a year full of great horror movies (“The Witch,” “Don’t Breathe,” “The Invitation.”) “The Monster” may have more modest goals than some of the others, but it deserves a place on that list.