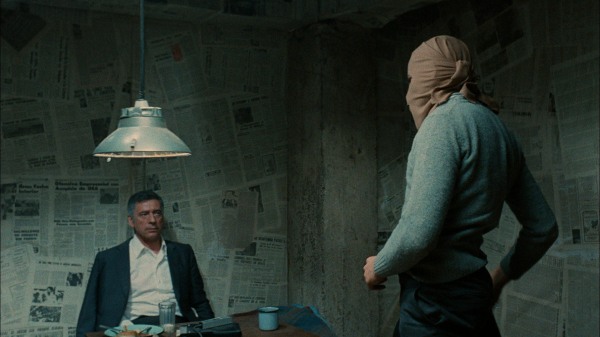 “Governments may change. But the police remain.”

That line seems chilling, a blood-curdlingly neat summation of the politics of repression and control in regimes everywhere. But what’s unsettling about how the line is delivered in Costa-Gavras’ “State of Siege” is that the speaker doesn’t mean to be sinister. A “consultant” for Latin American police departments working on behalf of the CIA, he’s merely describing his business, and how business is always good.

The intersection of business and politics, of freedom and fear, of governments and revolutionaries has been a hallmark of director Costa-Gavras’ career. While the environments and political issues change (his last two films looked at high finance (“Capital“) and collusion between the Nazis and the Catholic Church (“Amen”), Costa-Gavras comes again and again to the role of individuals in organizations, and what they do when those organizations’ goals conflict with humanity at large.

Fresh off the success of 1970’s “Z,” Costa-Gavras followed up with two more movies, both released last month in Blu-ray editions by The Criterion Collection. I haven’t seen 1971’s “The Confession,” starring Yves Montand as a Czech official kidnapped and brainwashed. But 1972’s “State of Siege” is a riveting political thriller, also starring Montand as a very different sort of political prisoner.

The film opens with a shot of an innocent-looking parked car, then widens to extreme long shots of an unnamed South American country (we later learn it’s modeled after Paraguay). Swarms of soldiers and plainsclothes officials are filling the streets like ants, searching cars and questioning passersby. Costa-Gavras deliberately doesn’t focus on any one element of this tableaux, and the effect is chaotic, as if these government police are like foreign bodies infecting the bloodstream of a city.

Finally, the camera comes back to that little car, and a policeman discovers a dead body in the back seat. It’s Philip Santore (Montand), a USAID worker ostensibly in the country to help advise local police on traffic and communications improvements.

Then the film circles back a week, to show us the kidnapping of Santore and two other officials. Dozens of revolutionaries are involved in a clockwork operation that involves hijacking cars from motorists, and staging all three kidnappings simultaneously. Costa-Gavras shoots it all matter-of-factly, almost documentary-style. We get a sense for both the scope of the political opposition and of their cunning.

From here, “State of Siege” expertly balances several different elements. We see government officials and police trying to find the prisoners. We see extended interrogation scenes between the cool, patrician Santore and his kidnapper, who patiently draws out of him exactly what kind of “consulting” Santore really did for the police department. And we follow the press, who begin to wonder why a mid-level USAID worker would be the subject of such a high-profile political kidnapping. Just who is Santore, anyway?

Costa-Gavras makes political thrillers that double as indictments, and that’s particularly true of “State of Siege,” which walks the viewer through the layers of corruption and brutality in such South American regimes, and the United States’ considerable role (through front organizations like USAID) in aiding and supporting such totalitarian governments. As the accompanying essay by journalist Mark Danner in the Criterion disc explains, Santore was based on a real person, a small-town Indiana sheriff who somehow found himself traveling from one country to the next, training the locals on what would now be called “enhanced interrogation techniques.”

There’s a cold fury that burns clean through “State of Siege,” but Costa-Gavras never lets his indictment get in the way of his filmmaking. Even though we know Santore’s fate in advance, the film is remarkably suspenseful in showing us the how and why. Over and over, the film uses repetition, whether it’s those early scenes of car after car getting hijacked in the same manner, or a late scene where a revolutionary meets with one ally after another on a city bus to discuss his fate.

The repetition builds suspense, but also suggests that the cycle of violence between oppressor and oppressed will continue over and over, all over the world. And Costa-Gavras has been there to make movies out of it.