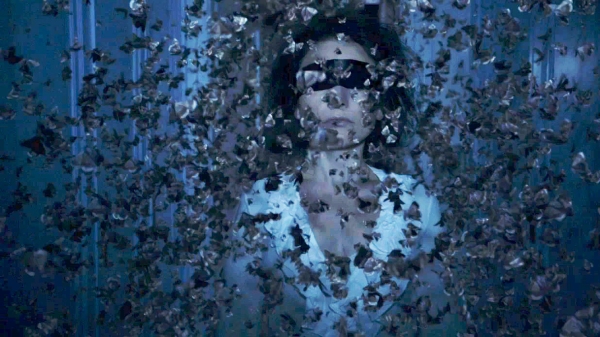 In the opening scene, Evelyn (Chiara D’Anna) arrives at the English manor of Cynthia (Sidse Babett Knudsen), an imperious lepidopterist who keeps hundreds of butterflies pinned to the walls of the mansion. As Evelyn dutifully scrubs the floor and hand-washes Cynthia’s underthings, Cynthia coldly criticizes and taunts her. When Evelyn makes one tiny slip, Cynthia takes her behind closed doors for “punishment.”

While Cynthia yearns for a more conventional sort of love affair, Evelyn keeps purhing their arrangement into darker territories. Like those butterflies on the wall, each are trapped by their own differing ideas of what love and desire should mean. They may come to some kind of detente, or they may destroy each other in their struggle for control.

There’s no nudity in “The Duke of Burgundy,” yet we feel like voyeurs watching the intimate sexual desires of these women played out on screen. Strickland makes the film an homage to ’70s European art cinema, suffusing the screen with soft-focus double exposures, sudden cutaways to shots of butterflies and moths, and hallucinogenic dream sequences set to an ominous harpsichord-and-choir score. It’s a bewitching experience.

“52 Tuesdays” (1:30 p.m. Saturday) — A teenage girl struggles to understand her own identity as her mother goes through a gender transition in this acclaimed Australian drama, getting its Madison premiere.

“El Casamiento (The Marriage)” (4:30 p.m. Saturday) — This affecting Uruguayan documentary follows the marriage preparations of a longtime couple, transsexual Julia and construction worker Ignacio, finally tying the knot after 20 years together. Director Aldo Garay will take part in a Q&A via Skype following the screening.

“Pride” (6:45 p.m. Saturday) — Striking British miners in the 1980s find an unlikely ally — gay rights activists also upset with the Thatcher government — in this rousing drama starring Bill Nighy and Imelda Staunton. This film is out on DVD and interestingly — and shamefully — the box description makes no mention at all of the film’s gay themes, even Photoshopping out gay rights slogans from protest signs in the cover photo.

“Stranger By The Lake” (11:30 p.m. Saturday) — My full review is here. Hitchcock goes cruising in this unsettling French drama, as a young gay man vacations at a secluded beach known for being a pickup spot, and thinks he may have witnessed a murder.