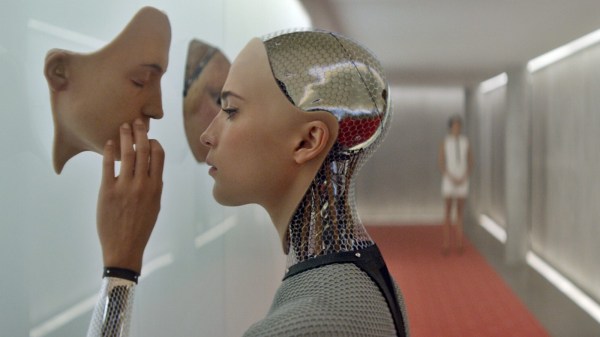 Novelist Alex Garland wrote the screenplay for Danny Boyle’s “Sunshine,” which aimed for being an epic science-fiction film but somehow got distracted into becoming a serial killer thriller along the way.

The film opens with Caleb (Domhnall Gleeson), a low-level coder at a massive Google-like company called Bluebook. Caleb has just won a company prize to spend a week with Bluebook’s founder, Nathan (Oscar Isaac) at his remote compound, working on a mysterious project.

The estate is a technological wonder, built into the banks (and over top of) a flowing river in a pristine valley, all glass and reclaimed wood. But what’s inside Nathan’s house is even more stunning; a robot named Ava (Alicia Vikander). Design is big on Nathan’s mind (and Garland’s), and CGI turns Ava into an android wonder; some parts of her body are covered by lifelike skin, others by a rubberized coating, while her abdomen and limbs are translucent, so we can see her inner workings a-glow inside.

Nathan wants Caleb to vet Ava and see if she’s a true artificial intelligence, a self-aware being. Much of “Ex Machina” is structured as a series of sessions between Caleb and Ava, separated by glass. The magic trick of “Ex Machina” is that we can see she’s a robot, Caleb can see she’s a robot, and yet he responds to her as a human being, and so do we. Vikander’s canny, intent performance mixes childlike wonder and a knowing “otherness” to really make us believe in Nathan’s creation.

Every session with Ava is followed by a debrief with Nathan, who is a very strange sort of Dr. Frankenstein, a beer-swilling, weightlifting backslapper who says “Dude” a lot, and is clearly withholding information from Caleb. (It’s an ominous but surprisingly funny performance from Isaac, especially when Nathan explodes into an unexpected full-on disco routine.)

Caleb, understandably, starts getting suspicious about what’s going on at Nathan’s compound. What’s with the sudden power outages? Who is the Asian servant who Nathan mistreats so callously? And why is there a spiderweb of broken glass in Ava’s room?

Garland confines the action to Nathan’s estate and these four characters, giving “Ex Machina” an effectively claustrophobic feel as Caleb starts to peel back Nathan’s secrets. Garland flirts with big ideas, especially in the conversations between Nathan and Caleb over what constitutes a human being. I liked the touch that Nathan programmed Ava’s human responses using data mined from his customers’ search engines. Because if you want to know how someone really ticks, look at their browser history.

The shift into conventional thriller territory at the end is a bit of a letdown, but not by much. Garland’s commitment to his weird, edgy material, and his unhurried and thoughtful execution of it, makes “Ex Machina” something special.