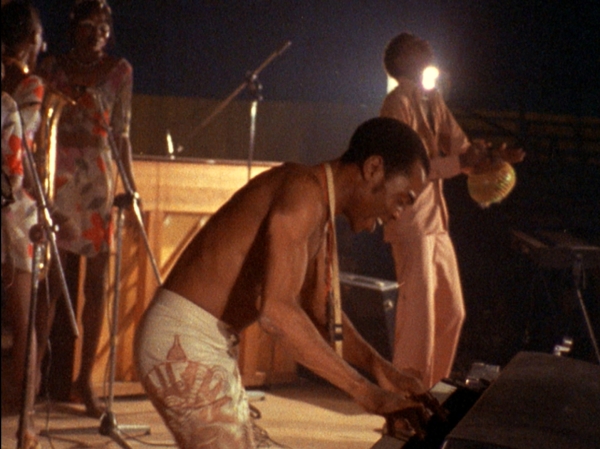 It’s when “Finding Fela” tries to be both at the same time that it gets a little shaky. Gibney’s film is now out this week on DVD and on Netflix Instant.

“Fela!” does seem like a terrible idea for a Broadway musical, as Questlove of The Roots says about when he first heard of it. What does the politically-charged, hypnotic music of Kuti have to do with the well-to-do audiences in Manhattan? But under the guidance of artistic director Bill T. Jones (who is coming to the Wisconsin Union Theater on Valentine’s Day), the musical captures the contours of Kuti’s story as well as the spirit of his music. With the excellent Afrobeat band Antibalas serving as house musicians, performances erupt into wild onstage parties that seem to have little to do with the carefully orchestrated corporate-backed musicals elsewhere on Broadway.

What Gibney does is use the play as a visual device through which to tell Kuti’s story. We’ll see a few lines from the musical as the actor Kuti describes his upbringing in Nigeria, then cut to archival footage and interviews with people who were there. And beneath it all is the music — humming, throbbing Afrobeat songs that could be propulsive and energetic, or stretch out to a simmering half-hour or so. It was Kuti’s ambition in part that thwarted his efforts to make it big in America — record labels kept asking him how they could turn a 28-minute song into a three-minute hit on the radio.

While Kuti was an inspiration and a hero to many in Nigeria and across Africa during a turbulent political time, Gibney (“Taxi to the Dark Side,” “Enron: The Smartest Guys in the Room”) doesn’t flinch from some of the less laudable aspects of his character. His treatment of women was abysmal, and his house was filled with his many wives, all sitting around waiting to serve him.

There is plenty of live footage of Kuti, both in interviews and onstage, and the live performances from “Fela!,” bold and colorful, add a great deal of excitement to “Finding Fela.” But the film falters when it lets the musical take over, lets Jones interpret the facts of Kuti’s life that we’re seeing for us. You can feel Gibney’s and Jones’ different agendas grinding against each other at times, and when “Finding Fela” slips into “behind the scenes at a play” mode it’s much less interesting.

But then, it wouldn’t be a documentary about Kuti if it was neat and well-behaved.