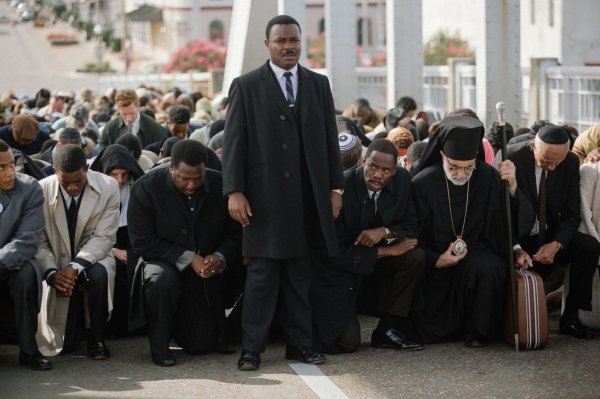 As I wrote on Friday, Ava DuVernay’s “Selma” is a magnificent film, an urgent historical drama that makes the civil rights battles of the 1960s feel painfully relevant to the civil unrest of today. Much of the film’s potency comes from DuVernay’s refusal to wrap the events in the film in the gauzy cloak of history. Everything about the film, from the screenplay bracing honesty to the nuanced and convincing performances, is designed to give the film a we-are-there immediacy.

But DuVernay and screenwriter Paul Webb also use two familiar techniques of historical dramas, things we see in almost every movie based on real events. At first, these techniques come almost as a comfort, we’re so used to seeing them. But then it becomes clear than “Selma” is using them in a clever and even subversive way, as a rebuke to the traditional historical narrative about civil rights.

The first is the use of scene-setting text throughout the film to orient the viewer as to where we are in a given scene and who we’re seeing. This is a pretty common narrative technique in historical drama (“The White House, Jan. 24, 1963).

But the text in “Selma” is presented as if taken (and may very well be taken) from the secret files that the FBI under J. Edgar Hoover gathered on King. Hoover had King under surveillance, tried to discredit him for his infidelities and even nudge him towards suicide, and the text reflects this suspicious tone. For example, when King calls legendary gospel singer Mahalia Jackson because he needs to “hear the Lord’s voice,” the text sneers “King contacts Negro entertainer.”

We’re so used to seeing such text take an omniscient, God’s Eye perspective on historical events that it’s jarring to see such biased, even prejudiced text in a film. DuVernay’s point is that observations like these were the official history of King, according to the white power structure in the South and in much of Washington, D.C. Putting it on-screen gives such official prejudice a terrible weight, underscoring the magnitude of what King was struggling to overcome.

The other technique also involves on-screen text, and comes at the end of the film. As King gives his thundering speech in Montgomery, Alabama, the camera finds several of the players in the film, and shows us a sentence or two about what happened to them. There’s John Lewis, future 14-term Congressman. There’s Alabama Governor George Wallace, who seven years later will be paralyzed by an assassin’s bullet. These kind of where-are-they-now messages were a familiar part of historical dramas since well before “Animal House” made fun of them.

But then the camera finds a protester, a white woman named Viola Liuzzo, listening raptly to King’s speech. And the text tells us that, five hours from now, she will be murdered by Klansmen on the way home from the event.

It’s a shocking detail that abruptly breaks through the glow of victory that pervades the final scene. To tidily package away these events as history, as something that happened then and not now, does them a disservice, DuVernay is saying. And it reminds us that the struggle was far from over, there were still lives that would be lost, and the questions that “Selma” asks — about racial justice, about violence, and about who gets to tell the story of our shared past — still need asking.