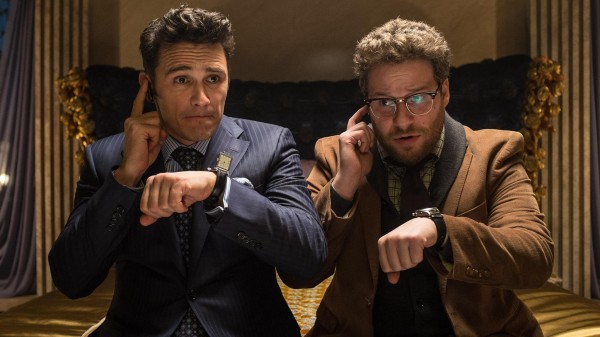 “The Interview” is now streaming on several major services, including YouTube and Google Play, and is playing in several theaters, but none in Madison or Milwaukee. R, 1:44, two and a half stars out of four.

“The Interview” is something of a disappointment, and I’m not just saying that because North Korea has gotten its Internet back up. After the achingly funny apocalyptic comedy of “This is the End” and the (relatively) more grounded comedy of last summer’s “Neighbors,” Seth Rogen and his writing-directing partner Evan Goldberg seem to be coasting a little this time around, with a potentially great, risky comic idea that they’re not quite sure what to do with.

And, yes, we should acknowledge at this point that “The Interview” has become much more than must a movie. After hackers allegedly tied to North Korea broke into Sony’s computers and began making threats, Sony Pictures and theater exhibitors blinked at releasing the film on Christmas Day. They reversed course, and now the film is streaming online on several services and currently screening in certain theaters here and there — the closest one to Madison appears to be the Movies 16 in Janesville.

“The Interview” reunites Rogen with his “Freaks and Geeks” pal James Franco. Franco plays Dave Skylark, the unctuous host of a cable celebrity chat show known for getting big scoops, like a very funny opening scene where Eminem casually reveals he’s gay. (“It’s like getting Spike Lee to admit that he’s white!” enthuses his producer, Aaron Rapoport (Rogen). But Aaron is also a little tired of the TMZ life, and wants to do some serious news reporting for a change. When he learns that North Korean dictator Kim Jong-un is a huge fan of Skylark — second only to his love of “The Big Bang Theory” — he sees an opportunity. Dave will get an exclusive interview with Kim.

Dave’s up for it, because Dave’s up for anything. But on the way to Pyongyang, the pair are waylaid by a CIA agent (Lizzy Caplan) who wants Dave to assassinate the North Korean leader using a ricin-spiked handshake. Dave and Aaron reluctantly agree, and head into North Korea.

The first half of “The Interview” is pretty good — I think Franco is miscast as playing a vacuous Ryan Seacrest type, but the screenplay by Dan Sterling (with, presumably, some improv by Rogen and Franco) is full of good lines. And the film’s really great joke comes when Dave meets Kim (Randall Park), and finds him to actually be a really cool guy. He’s self-deprecating and fun to hang out with, and as Dave shoots hoops, rhapsodizes about Katy Perry and hits the clubs with the head of a totalitarian state, he wonders if he can really kill his new bro. Male friendship has been the underlying thread of Rogen’s movies going back to “Superbad,” and “The Interview” could have been really transgressive if it had followed this path a little farther. What if all your friends hated your new BFF, just because he starves his people and threatens to start a nuclear war?

Instead, “The Interview” takes the easy way out, which means a lot of dick and butt jokes. I mean, a LOT, even by the standards of a Seth Rogen movie. By the time Aaron recovers a cylindrical package dropped by a CIA drone and has to conceal it from North Korean guards, you know exactly where it’s going. “This is the End” certainly had its gross-out moments, but the fun of it came from its mix of comedy and horror, and not knowing what was coming next. Here, you always know what’s coming next, and what orifice it’s coming from.

Running nearly two hours when it should have been a brisk 90 minutes or so, “The Interview” palpably starts to run out of momentum in the second hour, and the last 20 minutes are a virtually laugh-free action climax with tanks, helicopters, and fountains of blood. There were more laughs in the climax of “The Expendables 3.”

Censoring the movie was a truly dumb idea, and I do feel the appeal of road-tripping to Janesville or Beloit to see “The Interview” as a way of celebrating free speech. (Just try not to get popcorn grease on your copy of the Bill of Rights.) I just wish we had almost gone to war over a movie with a stronger third act.

2 thoughts on ““The Interview”: Well, that was a lot of work to see an okay movie”