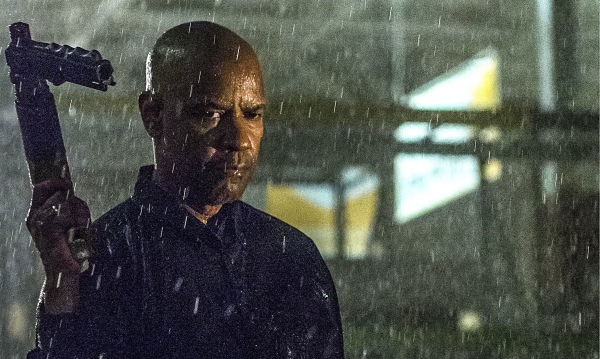 “Training Day,” the first collaboration between Denzel Washington and director Antoine Fuqua, was a live wire of a movie, a nervy character drama masquerading as a thriller. We hadn’t seen this dangerously unpredictable Denzel before.

Twelve years later, Washington and Fuqua reunite for “The Equalizer,” and we most definitely have seen this Denzel before. The movie, an update of an ’80s TV show that shares a name, basic premise and little else, is a joyless and predictable action movie in the vein of almost every Liam Neeson movie in the last five years. By the time we see Washington walking towards the camera in slo-mo as a fireball erupts behind him, you almost feel bad for him. Where did that spark go?

It’s too bad, because the movie seems to have potential early on. Washington is Bob McCall, a kindly employee at a Home Depot-like chain who lives alone, quietly, only venturing out late at night for a cup of tea and a good read at the local all-night diner. Washington seems most alive playing Bob here, still and vaguely sad. When he’s drawn out of his shell but a fellow diner, a Russian prostitute named Elena (Chloe Grace Moretz), the connection feels just tentative enough to be affecting.

Then, the plot gears start grinding. Elena runs afoul of her pimp, who is well connected to an East Coast Russian crime boss named Pushkin. (Tolstoy apparently runs the West Coast). When Elena is beaten nearly to death by her pimp, Bob takes matters into his own hand, striding into the pimp’s den and wasting his entire crew. What’s interesting about this scene is the tension between Bob’s obvious military training and his fragile mental state. Before the carnage begins, he opens and shuts a door several times, like an obsessive compulsive trying to calm himself. And when the last body falls, he stares into the distances and whispers, “I’m sorry.”

But that Bob vanishes fast, replaced by a superhuman warrior who can waste legions of bad guys without breaking stride, often using ordinary household items he finds lying around, MacGyver-style. Pushkin’s right-hand man, Teddy (scenery-chewing Martin Csokas) arrives to raise the stakes and bring reinforcements. Apparently in the Russian mob, you can tell how deadly someone is by how many tattoos they have and how outrageous their beard is.

If you’re a fan of hard-R “quality kills,” you might have a passable time at “The Equalizer,” especially in a very protracted climax in the Home Depot-like store. But Fuqua seems to lean on the blood spatters and exit wounds because there isn’t much else interesting going on — Bob is completely closed off to us as a character, and even seems to lose sight of the reason for his killing spree — we don’t see Moretz again until the end of the movie. He’s just a hero we don’t care about finding new ways to kill anonymous villains we don’t care about.

One doesn’t expect much more from Fuqua, who went on from “Training Day” to make increasingly violent and undistinguished action movies like “Olympia Has Fallen.” But we expect so much more out of Washington — even in a silly potboiler like “Unstoppable” or a goofy action-comedy like “2 Guns,” Washington almost can’t help but project a droll wit and a vulnerability that elevates his performance. Here, that appeal has been switched off, equalized out of existence.