Sean Weitner writes about “Visitors,” which played to a packed house at Sundance Cinemas on Tuesday night:

“Visitors” is a mesmeric, meditative film, and those aren’t subjective judgments. Stitched together from long shots of people’s faces, abandoned skyscrapers, decaying statuary, wintry swampland, the moon and a Bronx gorilla, this non-narrative film conjures a mood of ominous ruin.

The human faces are each absorbing to contemplate as they look directly back into the camera — there are sparks of life for viewers to kindle — but the cumulative sense is of slack-jawedness; often we seem to be watching them watching something else … and thus we’re seeing ourselves, a mirror audience.

By interposing the faces with gargoylish imagery, the movie suggests humanity has reached the end of its evolutionary rope and we the audience aren’t doing much about it, stuck with an Earth as sterile as the moon, a populace whose gaze is more passive than the simian sister staring us down.

Director Godfrey Reggio is unquestionably a maestro. Best known for his Qatsi trilogy (which began with “Koyaaniqatsi” in 1982), Reggio introduced “Visitors” Tuesday night at the film festival with a barrage of qualifiers. “It’s not a story to be told; it’s a story to behold.” It’s “cinematic poetry.” You may see your seatmate nod off during the film because it’s a “deprogramming experience.”

So, the first thing Reggio is a maestro of is patter. In the post-film Q&A, he also talked about contemporary gadget-ensnaredness being “not science fiction but the fiction of science.” The moon is his movie’s “megaphor.” Regardless of how his subjects were filmed, he digitally removed their surroundings and fought against members of his crew who wanted a white background; Reggio wanted a “blackground.”

Particularly because criticism is the practice of trusting the tale and not the teller, I’m loath to forge a connection between the director’s verbal facility and the question of his film’s facile-ity. But watching “Visitors” after Reggio’s introduction, it was easy to attribute its questing interplay of images to someone who was perhaps more sloganeer than poet, juxtaposing elements in a way that was often evocative but sometimes too plainly provocative — cutting from a treescape to a landfill landslide, or from swampland stumps to a graveyard, or from a dark-skinned woman with ethnic signifiers such as kinky hair and full lips to a scrawny, shaven-headed white guy so pale he is either genuinely albino or striving to do his best impression thereof.

In those obvious moments, the movie’s purely contemplative spell is broken. You feel like you’re in for a tiny screed, or an expression of the director’s credo … in fact, “screedo” might be a nice addition to Reggio’s portmanteau vocabulary.

The second thing Reggio is a maestro of is his crew, which includes six cinematographers (three co-equal, and three “additional”), a visual effects crew, two “dramaturgical associates” and one “chief instigator.” The movie, which is 99.9 percent in black and white, is quite a feat of technology. Despite frequently showing two faces side by side, or around a table, everyone was filmed separately and had their pixels pasted together (except for the movie’s few genuine crowd scenes). The moon is also computer generated from topographic maps. But the effect is gigantic — every frame does feel a freshly struck image of pure thought. (The Louisiana footage is particularly luminous, the greenery burned white against the ragged relief of tree trunk or cloudy sky.) All directors have to synthesize a crew around a vision, and without recourse to a storyline, “Visitors” needs more vision that most. 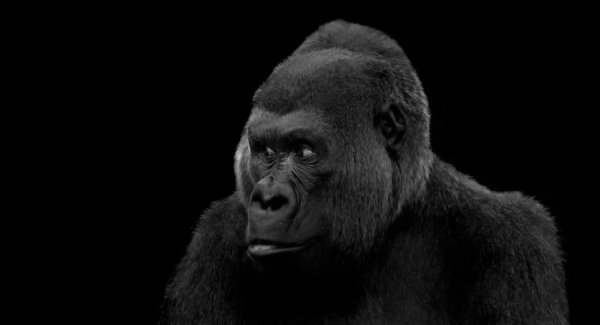 Reggio’s most major collaborator is Philip Glass; in the Q&A, Reggio called the five Glass compositions that make up the entirety of the soundtrack the movie’s “emotional narrative” (while also insisting that the film has “no meaning”). Glass has scored all of Reggio’s films, and the director described their collaboration as peculiar: He actually brings Glass on site during filming to soak up the on-set experience and understand the effect. I’m not music scholar enough to contextualize Glass’ work here except to note that its thrumming, cyclical movements sounded unmistakably like him.

“Visitors” is a special film, and if it sounds like your ball of wax, it is and then some. But Tuesday night’s show was introduced by Cinematheque’s Jim Healy, then by David Krakauer, Reggio’s longtime friend and the director of the Wisconsin Institute for Discovery, then Reggio himself, and then the movie started without the festival’s charming campfire intro. The cumulative effect seemed intended to convince you that the movie isn’t merely special but sacred, a source of true light in a medium/industry/festival of pabulum. Without taking away from his genuine filmmaking talent, Reggio’s ability to cultivate such a vibe may be his greatest area of mastery.