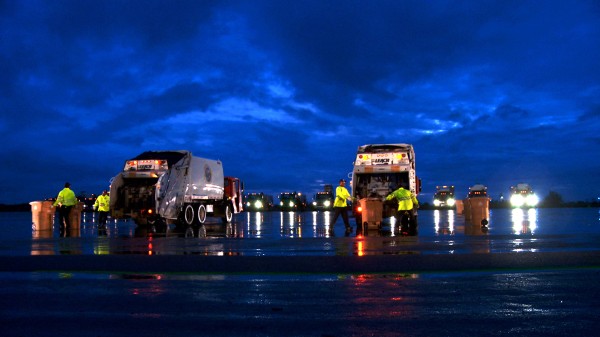 “I want to thank Tales for being the kind of festival that will play both ‘Chasing Ice’ and ‘Planet of the Apes,'” filmmaker and Tales From Planet Earth film festival programmer Alex Rivera said (according to the festival’s Twitter feed) on the festival’s opening night on Friday.

And even those extremes don’t capture how many different kinds of films — funny, thoughtful, sad, beautiful — the biennial free on-campus film festival fits under the umbrella of “environmental film.” Sponsored by the Nelson Institute for Environmental Studies with help from the UW Arts Institute, the festival took over several campus and downtown venues.

I just saw a couple of films at this year’s festival, but they went to similar extremes. Rivera, who brought his trippy sci-fi film “Sleep Dealer” to Tales in 2009, programmed a slate of sci-fi films that looked in particular at how the future will be “transnational,” crossing borders in interesting and perhaps unsettling ways. (“Sleep Dealer” was a prime example, as Mexican workers uploaded their consciousnesses into Tijuana mainframes so they could “work” virtually in America.)

“Transfer,” by Damir Lukacevic, was a cousin of “Sleep Dealer,” as a pair of wealthy elderly Germans facing mortality receive a proposition from a mysterious company. For $1 million euros, they can upload themselves into the bodies of healthy, attractive young people from the Third World, essentially getting a reboot on life. The “donors” come from impoverished nations, signing away their bodies for a big cash payment for their families.

The Germans sign on the dotted line, and soon wake up in young, strong bodies of an Ethiopian woman and a Malian man. But the interesting twist is that, while the German minds sleep during the night, the Africans’ minds “wake up” for four hours a night and get the use of their bodies back.

So we have four people sharing two bodies, each with a claim that the body is “theirs.” At night, the Africans plot to overthrow their German hosts, while by day, the Germans grow uneasy with the arrangement. While some plot developments bordered on the farcical (the woman gets pregnant, and not only are the foursome not sure who the father is, they’re not sure who the mother is!) but this is thoughtful science fiction that touches on a variety of issues, from Third World exploitation to genetic engineering.

But the film that seemed to make the biggest splash Sunday was the documentary “Trash Dance,” which I saw before the festival started. Choreographer Allison Orr gets a grant to create a modern dance piece — using the employees and the equipment of the Austin Department of Sanitation.

The garbage truck workers are understandably skeptical that something elegant can be made out of their smelly, stained world, but Orr is so nice (as in the getting-things-done variety of nice) that her charm and perseverance wins them over. The backstories behind the workers, some who see it as just a job, others as a valued public service, are surprising and moving. When we finally see the ballet, with garbage trucks turning in perfect sync, it is actually quite beautiful to watch.

The takeaway is that our definitions of beauty and ugliness need to be readjusted, just as our preconceptions of what an environmental film is should be adjusted. And the audience seemed to be inspired — judging by the photo someone posted on Twitter of themselves doing a ballet move as they deposited refuse in the recycling bin outside the theater. (“Trash Dance” is also available for rent on ITunes.)