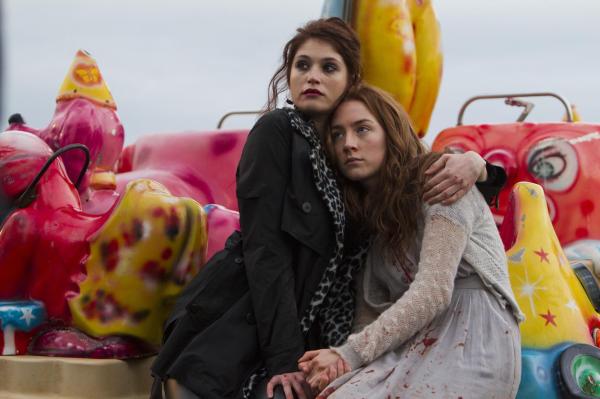 In 1994, director Neil Jordan adapted Anne Rice’s “Interview with the Vampire” for the screen. It was elegant and clever, if a little overwrought and overburdened with star power (Brad Pitt and Tom Cruise). But one thing it definitely wasn’t was a horror film. There were no jumps or jolts to be had, but rather a moody, mordant take on the pluses and minuses of immortality.

Nearly 20 years later, Jordan’s “Byzantium” goes back to the blood-filled well. It’s stylish and gory, with excellent performances and a similarly grim approach to the life of a vampire. And it’s not a horror movie, although, whatever it is, it’s a good one.

The action in Moira Buffini’s screenplay takes place in the modern day, in rural England. Mother Clara (Gemma Arterton) and teenage daughter Eleanor (Saoirse Ronan) move from town to town. Eleanor is the conflicted Brad Pitt of the pair, preferring to stay hidden, often feasting only on the very elderly as a sort of bloodthirsty end-of-life caregiver. Clara, meanwhile, works as a prostitute and stripper, gleefully and grotesquely murdering her johns. She’s the Tom Cruise of the pair, arrogant and unabashed in her appetites. It’s because of Clara that they keep moving from town to town.

Landing in a wilted seaside resort town, Eleanor befriends a young man suffering from leukemia (Caleb Landry Jones), while Clara convinces a lonely innkeeper (Daniel Mays) to set up a brothel in his establishment. In their own ways, mother and daughter see vampirism as both a curse and a release. Clara, in particular, is wreaking gleefully vengeance on the kind of men who would cruelly abuse her when she was mortal, centuries ago.

Jordan’s camera sweeps mournfully around this little seaside town, the blue-greys of the ocean contrasting nicely with the occasional spurts of bright red. For much of the film, “Byzantium” is almost ruminative, with lots of voiceover from Eleanor about the shifting mother-child power balance and their long, long history. But the film’s pace does start to quicken when we delve deeper into that history, and the story of a mysterious black island that supposedly granted immortality. It turns out there are other vampires out there, including Sam Riley and Jonny Lee Miller. And they may not like the idea of women being part of their club.

If you’re looking for some effective scares for Halloween night, the slow pace and somber tone of “Byzantium” will likely leave you cold. But I felt completely sucked in by this unusual tale, which satisfyingly twists some of the tropes of the vampire genre in interesting ways. The seaside town definitely feels more like a snug fit for Jordan than old New Orleans did, and he finds the romance and the tragedy in the empty boardwalks and deserted beaches, a town that, like his two protagonists, may have lived too long.

The filmmaking elegantly shifts from past to present, and Ronan (“Hanna”) gives another fine performance as a teenage girl much older than she appears. “Byzantium’ didn’t scare me a whit, but it works.