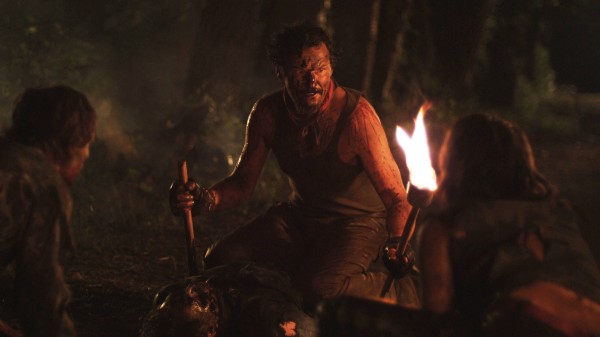 I’m kind of a wuss when it comes to horror movies, which makes me that much more susceptible and appreciative when a good one comes along. In honor of Halloween, here are five recent horror films that did the trick for me.

“Stake Land“: “Walking Dead” fans will dig this post-apocalyptic action-horror film, in which vampiric zombies rule the country, and a grizzled veteran and his young protege head north to a fabled “New Eden.” It’s an endlessly clever and surprisingly moving mix of “The Road” and “World War Z.”

“The Innkeepers“: My interview with Pat Healy is here. Ti West serves up a classic ghost story, as two low-paid workers in an old New England inn investigate the legends. Using noises more than visuals, West teases out the suspense as long as possible, and builds great chemistry between leads Pat Healy and Sara Paxton.

“The Frankenstein Theory”: My full review is here. This low-budget found-footage horror film puts Mary Shelley’s creature in “Blair Witch” country, as a film crew heads to the frozen north to find out if Shelley’s book was really nonfiction.

“The Cabin in the Woods“: I’m still not sure if this meta-horror film from the mind of Joss Whedon is a celebration or a condemnation of horror flicks. But it is a lot of fun.

“The Bay“: My full review is here. Barry Levinson tried his hand at found-footage horror, and the result was a surprisingly effective eco-terror film about inch-long parasites ravaging a seaside town.