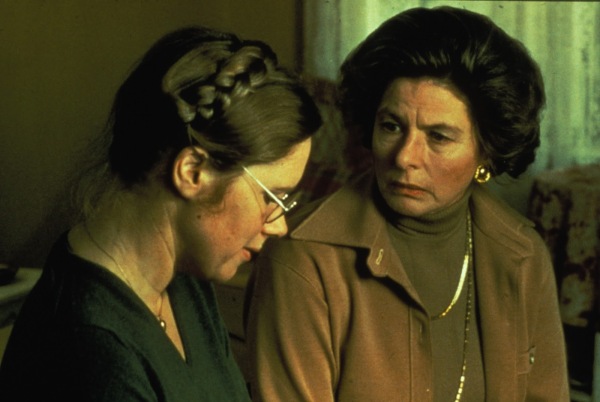 Autumn. A time for watching the leaves turn, making spiced apple cider on the stove, and, of course, engaging in bitter recriminations with your parents.

At least that’s how Ingmar Bergman does autumn (and I’m not sure about his opinion on the leaves or the cider) in “Autumn Sonata,” which the Criterion Collection just re-released in a new Blu-ray edition with new bonus features not on the original DVD version.  This is wrenching family drama as only Bergman can do it.

The 1978 film is also notable for being the only one of Bergman’s films to feature Sweden’s other famous Bergman, Ingrid. She plays a world-renowned concert pianist, Charlotte, who comes home to visit her eldest daughter Eva (Bergman favorite Liv Ullmann) after a long absence. Ingrid carries herself with an imperious glamor, her star power so bright it dominates the screen, and Ullmann has deliberately dowdied herself up as the repressed Eva. We learn that Eva has been taking care of Charlotte’s other daughter, the severely disabled Helena (Lena Nyman).

At first, relations are polite but wary between mother and daughter, but as the evening wears on, politeness gives way to honest expressions, as the emotions Eva has been bottling up since childhood come pouring out. The film turns into a lacerating mother-daughter war, the air thick with accusations and recriminations, the mousy Eva growing stronger and more fiery as Charlotte seems to physically retreat, horrified at the truth of her family that she kept ignoring, all those years out on tour. Meanwhile, Helena writes in inarticulate pain in the back room, a living symbol of Charlotte’s neglect.

Although the film has a couple of the characters, including Eva’s husband providing opening and closing narration, this is really a two-character film. Bergman and Ullmann give fearless, bruised performances, locked in bitter combat, horrified at the truths they discover about themselves. Bergman’s descent into confusion and regret is most pronounced (it was her final film role, and she was nominated for an Oscar), but it wouldn’t work as well without Ullmann’s mirroring performance, as quiet Eva finds her voice, and can’t stop using it. One would assume our sympathies would lie with Eva, the abused and neglected daughter, but she’s no saint, warped by a lifetime of silent frustration.

Bergman’s camera seems to inch in closer and closer as the wounds go deeper and deeper, and the rich autumnal colors (which glow in this new 2k transfer) seem to almost mock the emotional rawness of the content.

So how was this great meeting of the Bergmans on set? “Terrible,” a “headache,” a “nightmare,” Ingmar Bergman says in a 2003 interview included in the bonus features. For the first few days, Ingrid Bergman’s performances on set were far to big and theatrical, and Ingmar feared the movie would be a disaster. Finally, he showed her the dailies, and blessedly, she saw the error of her approach and adjusted downward. The shoot was still contentious between the two, but Ingmar got the performance he needed.

The Criterion Blu-ray edition also includes an exhaustive (as in three-and-a-half-hour) documentary on the making of “Autumn Sonata,” an audio commentary by Bergman scholar Peter Cowle, and, new to the Blu-ray, an interview conducted this year with Ullmann about the movie.