“Escape From Tomorrow” opens Friday at Sundance Cinemas. Not rated, 1:44, two and a half stars out of four.

Let’s face it. If “Escape From Tomorrow” had been shot at Six Flags Great America, we wouldn’t be having this conversation.

Randy Moore’s film is often clumsy and uneven, veering from slapstick to Lynch-lite surrealism. But it’s the story behind the film that makes you want to love it. Moore shot much of the film surreptitiously on the grounds of Disneyland and Walt Disney World, dodging smiling security guards and bewildered guests. There’s something just so weird about Disneyland, the relentlessly perky attitude, the mix of retro, futuristic, and retro-futuristic architecture all laid side by side, that makes it compelling.

When the film premiered at the Sundance Film Festival, most assumed the white-gloved paw of the Disney legal department would come down and quash it, but “Escape” has somehow survived. So you feel like you want to support the sheer guts it took to make this film, even if you wish it could have been better.

The film follows a family on their last day of vacation at an unnamed theme park that sure looks like Disney, even if the name is bleeped out. Dad Jim (Roy Abramsohn) gets a call that he’s been laid off, a fact he keeps from his wife Emily (Elena Schuber) and two kids. Instead, he puts on a too-big polo shirt and a fake smile and hits the park.

But of course, as every family knows, when you go on vacation, your troubles don’t stay behind at home. Jim starts to have strange visions, as the animatronic poppets in “It’s A Small World” turn demonic (or more demonic than they already look). His son’s eyes flash coal black. And Jim finds himself fantasizing and following two French teenage girls around the park. After all, if the Magic Kingdom can make his daughter a fairy princess and his son Buzz Lightyear, why can’t it make Dad’s dreams come true, too?

It’s this subversive streak — animal lust in Jungleland — that’s the strongest thread of “Escape,” and Abramsohn is quite funny as the suburban dad in crisis. In fact, the film works best as satire, often playing off some of the urban legends surrounding Disneyland, such as the one about the secret club where the princesses are high-priced courtesans, or the one about the guy who got decapitated on the Matterhorn. 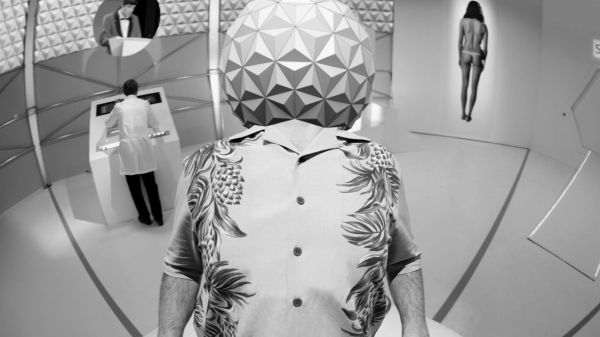 When the film takes itself seriously, it flounders, and “Escape” too often seems like a jumble of hallucinatory images, lacking the precision of the David Lynch films it seems to be aping. Veering from marital drama to broad science fiction, Moore can never settle on a tone, or a point, really.

That student-film aesthetic makes the film sort of lovable in its way, but it doesn’t make it a good movie. The next time Moore and his cameras go on a guerilla filmmaking mission, here’s hoping he brings a better script with him.