Memories fade. Less than 3 years later, thinking back on the Wisconsin protests against Gov. Scott Walker’s plans to strip public-sector employees of most of their barganing rights, I start to question my memory a little. Were the rallies really that big? Were they really that loud?

Yes and yes, and a new documentary, “Wisconsin Rising,” serves as a document to remind us of that. The hour-long film by Sam Mayfield has its Wisconsin premiere at 7 p.m. Wednesday at the Barrymore Theatre, 2090 Atwood Ave. Tickets are $5-$10 at the door, and Mayfield will be there to talk about the film and answer questions.

My guess is that the screening will be akin to a family reunion of Wisconsinites who took part in the protests, and the film is unabashedly shot from their point of view. After a short prologue on the importance of Wisconsin’s worker struggles (which gave the nation worker’s comp, among other things), “Wisconsin Rising” is a blow-by-blow account of what happened after Walker dropped his bombshell the week after the Packers won the Super Bowl, the state going from as unified as its ever been to as divided in a space of days.

Mayfield’s camera vividly captures the sights and sounds of the movement, the diverse of a crowd where firefighters and college students stood sign-to-sign (and sometimes slept side-by-side on the Rotunda floor). She talks to several of the best-known protesters, such as the Lincolnesque (in stature and beard, anyway) Arthur Kohl-Riggs, and legislators such as Sen. Kelda Helen Roys. She also follows a couple of regular Wisconsin citizens, including a schoolteacher and a school custodian from Oshkosh, as they take part in the movement and reflect on suddenly being demonized by the right. 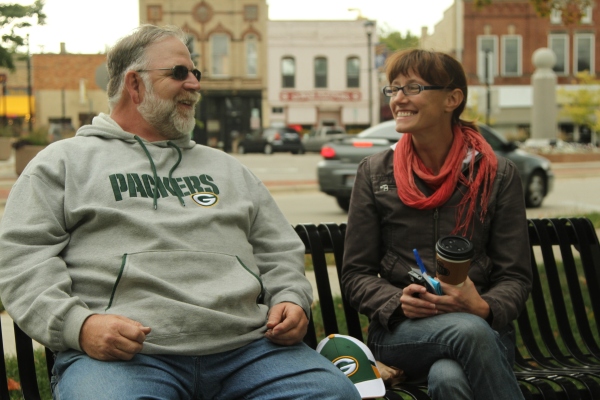 Much of this I remember — the Ian’s pizza donations from all over the world, the car-horn chants, the sound of Ryan Bingham’s raspy “This Land is Your Land” ringing across the Capitol. But some of it I forgot, like the surreal image of Democratic legislators, whose constituents were prevented from entering their Capitol, moving their desks outside so they could meet with them.

“Wisconsin Rising” actually gets more intriguing when it moves past the protests and into the unsuccessful recall effort to unseat Walker. Some liberal activists in the film make a persuasive argument that when the movement evolved from centralized mass protests to a decentralized election campaign, however well-intentioned in its efforts, the movement diffused and lost a lot of its power. It essentially went back to the old party-based approach to electoral politics, where Democratic politicians may have been more comfortable, but also where Walker’s deep-pocketed supporters had the edge, outspending the recall effort 7-1.

I don’t know where else the movement could have gone (a general strike would have backfired even harder than the recall effort among rank-and-file Wisconsinites, I think), but it’s an interesting case that could explain what happened to all that energy we saw in 2011, day after day, night after night. In any case, “Wisconsin Rising” is an engaging document of those times, and a reminder that, as we head into another round of elections in 2014, the fire still burns.

One thought on ““Wisconsin Rising”: This is what democracy looked like”