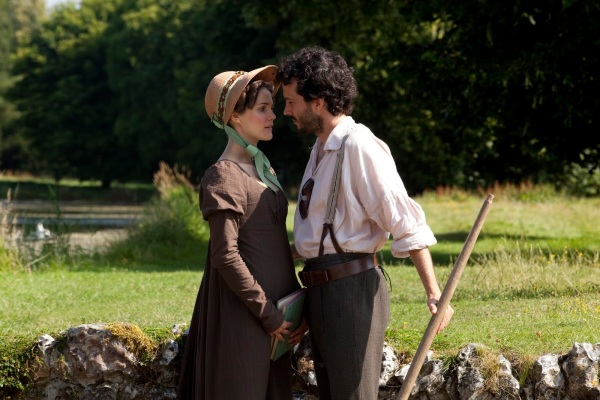 Diehard Jane Austen fans might see “Austenland” as something of an abomination. It takes the world of a Jane Austen novel — the clever dialogue, the elegant setting, the romantic plot turns — and turns it into something goofy and crass.

Lighten up, Darcy. The tone of writer-director Jerusha Hess’ comedy is appropriately ridiculous because the premise itself is so ridiculous. In the film (based on Shannon Hale’s novel), Austenland is sort of a theme park for lovelorn Jane fans. For a hefty fee, women get to play-act as a Jane Austen heroine, dressing in costumes, learning how to play whist in the drawing room, and, of course, getting wooed by the park’s stock of handsome male actors. It’s like Pride and Prejudice Fantasy Camp.

And it sounds like heaven to our Jane (Keri Russell), a bookish Yank who is such an Austen-phile that she has a Colin Firth Fathead watching over her bed. Unable to deal with 21st-century men, she cashes in her life savings for a trip to Austenland. Unfortunately, as Austenland’s matriarch ( Jane Seymour) explains, she only has enough money for the Copper Package. So while Platinum Package members get to wear the best dresses and sleep in the fanciest rooms, Jane’s accommodations are one step above “charwoman.”

Just like an Austen heroine, Jane finds herself choosing between two suitors. One is an actor (J.J. Feild), playing a Darcy-esque prig named Henry Nobley. The other is a groundskeeper at Austenland who is “out-of-game” (Bret McKenzie of “Flight of the Conchords”), who seems to offer the chance at a genuine, non-make-believe relationship. Will Jane choose reality, or the fantasy she’s chased all her life? Complicating matters is that Nobley is so convincing that one almost wonders if there’s a real spark of attraction underneath that waistcoat. 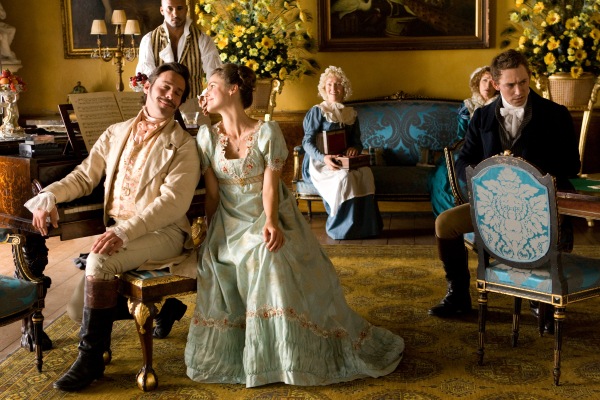 “Austenland” starts off silly and gets increasingly sillier — Jennifer Coolidge is a riot as a crass rich American who becomes Jane’s confidant, and blurts out very un-Austen-like lines like “Shut yer hole” in the drawing room. When a hunky new suitor (Ricky Whittle) who can’t keep his shirt on appears, we’re sure we’ve wandered into the realm of pure farce, somewhere between a rom-com and a French & Saunders sketch.

But I liked it, especially the eagerness of Hess (who co-wrote “Napoleon Dynamite”) to mercilessly tweak the conventions of romantic comedy, making the laughs broader and goofier as the movie progresses. And yet, what really sells the film is Russell, who is so slyly charming, attuned both to the zany comic moments and its wistful romantic undertone. She’s a great actress who, aside from FX’s “The Americans,” has been really underused in recent years — maybe it’s time to put her in a real Jane Austen movie. One that doesn’t quote Nelly’s “Hot in Herre.”

One thought on ““Austenland”: A comedy that tosses all sense and sensibility out the window”