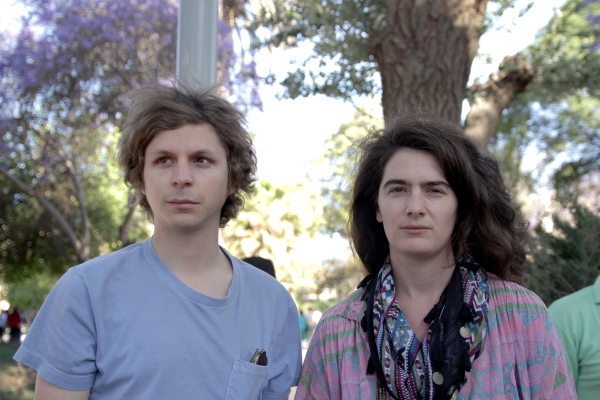 In “This is the End,” Michael Cera drew big laughs for playing himself as a callous Hollywood bad boy, because the image of him snorting coke and banging hotties was so different from his usual sweet and gentle persona.

In “Crystal Fairy,” Cera plays a character who is in many ways as unsympathetic, only this time he does it for real. The result is a strong and bracing performance, balanced out beautifully by another very different strong performance by Gaby Hoffmann.

Cera plays Jamie, a drug tourist of sorts who lives in Chile on an endless, unspecified source of income. His life seems focused utterly on chasing that next high, almost monomaniacal in his pursuit. Under a “Hey, that’s cool,” veneer, he seems deeply uncomfortable with other people when he’s straight, a mix of arrogance and social awkwardness. It’s only when he’s high, it seems, that he can finally forget himself.

At a party, Jamie hears word of a rare cactus, the San Pedro, from which a potent form of mescaline can be made. He urges his friends to come with him on a road trip in the Chilean desert to find some and, in a moment of addled intimacy, invites a girl he just met at a party to come as well.

The next morning, Jamie and his three Chilean friends set out on their trip, only to find they have another passenger — the girl, who Jamie has completely forgotten he invited. She’s a neo-hippie named Crystal Fairy (Hoffmann), a free-spirited type who is comfortable in her skin as Jamie is ill at ease in his, unabashed about walking around naked in front of the others, insistent on sharing her deepest personal secrets. With the three Chileans as kind of an audience, Jamie and Crystal Fairy spar all the way into the desert.

The offhanded, naturalistic approach Silva takes keeps you on edge — you’re never sure if something horrible or wonderful is waiting for these pilgrims in the desert. Both Jamie and Crystal Fairy are, in their own way, completely alone in this world. Jamie treats his journey with the self-absorption of a traveler on a business trip, while Crystal insists she’s deeply connected to every other living thing, oblivious to how precious and overbearing she comes off to others. If you’ve ever backpacked through Europe, you’ve sat next to both these types on a train.

I wish the three Chilean men (all played by Silva’s brothers) were more deeply drawn, and just when the film inches towards some kind of epiphany for Jamie and Crystal Fairy, Silva ends it, as if not wanting to compromise his loose approach with an actual climax. Still, “Crystal Fairy” is a funny and authentic look at two very distinct types of Americans abroad, who can’t escape themselves no matter how far they go.

One thought on ““Crystal Fairy”: Strangers in a strange land”