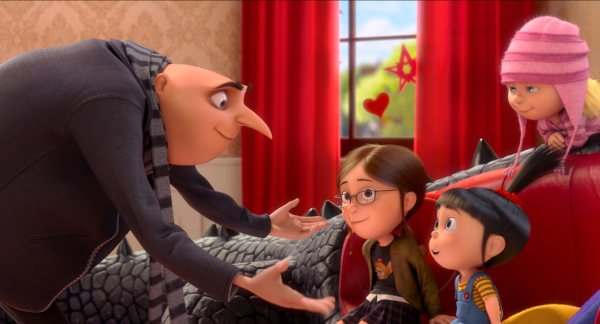 When I took my daughter, then 6, to see the original “Despicable Me” in 2010, she laughed at the joke about how the villainous Gru’s evil scientist henchman Dr. Nefario is hard of hearing, so when Gru asked him to design a dart gun, he instead created a fart gun. She laughed about this — she laughed during the closing credits, she laughed on our way out the theater, she laughed down the hall and into the lobby, she laughed out in the parking lot and into the car, and she laughed all the way home.

It would be too much to ask the sequel to hit that same comedic sweet spot for her, of course. And “Despicable Me 2” did make the kids laugh, although not as long and not as often. It’s an amiable, visually eye-popping animated movie that holds your interest, even as you sense that it’s not really taking advantage of the possibilities offered by the first movie. And the fart gun appears a couple more times, to increasingly diminishing returns.

The delight of the first “Despicable Me” lay in its wicked premise: a Blofeld-like supervillain named Gru (Steve Carell) gets distracted from his evil plans by having to adopt three orphan girls, and finds himself ultimately tamed and charmed by them. It was genuinely sweet, but it also had a a naughty edge to it. The nefarious glee Gru took in both stealing the moon and popping a kid’s balloon animal was hard to resist.

In “Despicable Me,” that edge is mostly gone. Gru is now a happy single dad who dotes on his three girls, and converted his secret lair into a jelly-making franchise. He’s content, until secret agent Lucy (Kirsten Wiig) approaches him; the Anti-Villain League is trying to find another supervillain who hijacked a secret laboratory, and wants his help.

Gru reluctantly agrees to play hero, and goes undercover at the local mall, where the AVL are sure the supervillain is hiding. Is it the proprietor of the local Mexican restaurant (Benjamin Bratt)? Or is it the owner of the men’s wig store (Ken Jeong)? Or is it — actually, that’s all the suspects the screenplay bothers to come up with.

After the outlandish plots and visual gags of the first “Despicable Me,” going undercover at the mall is pretty underwhelming. And, more fatally, Gru as hero is just not as interesting as Gru as villain. I mean, it’s adorable how much he cares for the little tykes, and the tentative romance between him and Lucy is nice and all. But it would have been funnier to see an inkling of the old Gru peeking through, perhaps momentarily swayed by the idea of rejoining the dark side. He’s just so (shudder) nice.

The filmmakers seem to recognize that a tamed Gru isn’t that interesting, because a hefty chunk of the film focuses on his adorable, marketable Minions. (The next movie in the franchise won’t be “Despicable Me 3,” but a Minions movie.) Voiced in a kind of pidgin French by directors Pierre Coffin and Chris Renaud, the Minions are like an army of little yellow Stooges, and the film diverts its path several times to give them room to get some laughs. (They also figure into the villain’s dastardly scheme.)

The antics of the Minions are enough to keep kids and adults involved, as is the dazzling 3D, including a post-credits sequence where bubbles and butterflies float out convincingly over the audience. The kids will be happy with “Despicable Me,” the parents won’t mind.  But I couldn’t help wanting to see Gru haul out his old panda bearskin bug, just for old time’s sake.