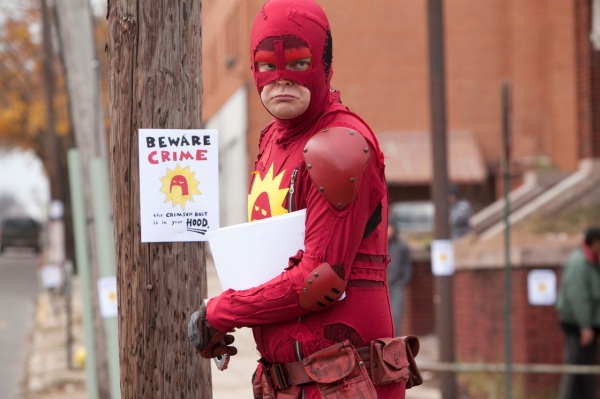 Pick of the week: “Super” — My full review is here. With “Man of Steel’ setting records in theaters, it’s a great time to revisit James Gunn’s funny and twisted demolition of the superhero mythos. When his wife (Liv Tyler) leaves him for a drug dealer (Kevin Bacon) Rainn Wilson’s troubled fry cook dons a costume and becomes the Crimson Bolt. Only he’s less masked avenger and more psychotic assaulter, with an even more sociopathic sidekick (Ellen Page) in tow.

Cult hit of the week: “Miami Connection” — The UW-Cinematheque recently featured this cheesy ’80s action film as part of its Marquee Monday series, so you know it’s good. When motorcycle ninjas flood Florida with drugs, it’s up to a martial arts rock band to fight back. Classic so-bad-it’s-great flick.

Comedy of the week: “Dead Men Don’t Wear Plaid” — Back in 1982, Steve Martin and director Carl Reiner made this interesting and clever experiment, a noir parody that intercuts Martin into clips from dozens of classic movies, letting him banter with the likes of Humphrey Bogart and Veronica Lake. The more you know the source material, the funnier it is.

Documentary of the week: “How to Grow a Band” — As a big fan of Nickel Creek, I was fascinated to see this new documentary about mandolin player Chris Thile, and his evolution into his new project The Punch Brothers.

Action movie of the week: “13 Assassins” — My full review is here. — Takashi Miike’s bloody and largely reverent ode to samurai epics tells the tale of a ragtag band of samurai who plot to ambush a psychopathic lord and his 100 soldiers. The end of the film is a bravura 40-minute battle, where swords, arrows and even a stampede of flaming bulls are all employed as weapons.