Ten years ago last week, “The Notebook” opened in theaters, making stars out of Ryan Gosling and Rachel McAdams, spawning adaptations of every other gooey romance novel Nicholas Sparks ever wrote, and taking some of the heat off “Love Actually” as the sappiest romance of the ’00s.

At the time, I actually sort of liked it, and thought McAdams and Gosling brought loads of charm to what was a very silly story. But one thing has bugged me ever since about “The Notebook” — the ending. As I was of the theater, I wrote in my head a much better ending to “The Notebook.” one that is even more sappy and sentimental than the original, but more interesting and surprising as well.

END_OF_DOCUMENT_TOKEN_TO_BE_REPLACED 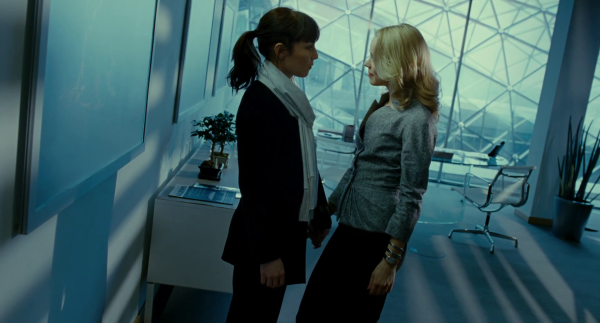 Maybe “Love Crime” was too much in director Brian De Palma’s wheelhouse. The French thriller, about a pair of female executives whose struggle for power turns murderous, had a Hitchcockian gloss to it that the director of “Dressed to Kill” and “Blow Out” would find hard to resist.

But De Palma’s remake, “Passion,” feels like someone else’s idea of a Brian De Palma homage, gorging itself on familiar tropes — masks, surveillance cameras, dream sequences– and failing to build either tension or interest.

Noomi Rapace plays Isabelle (Ludivine Sagnier in the original), a bright young creative in a Berlin-based ad firm that works with a big mobile phone client. Isabelle comes up with a brilliant advertising campaign for a new camera phone, which her boss Christine (Rachel McAdams) brazenly takes credit for at a meeting. “It’s not backstabbing, it’s business,” Christine calmly explains when confronted. She’d expect Isabelle to do the same in her shoes.

Isabelle accepts the explanation at least at face value, but a power struggle is on, involving falsified incriminating emails, surveillance tapes and competition over one boyfriend (Paul Anderson). Isabelle starts to spiral into depression and paranoia. Christine appears to have destroyed her — but Isabelle may have a couple of tricks up her sleeve.

De Palma has some undeniably ravishing sequences, most notably the murder of a major character split-screened and choreographed to a ballet. But they seem like finger exercises in a movie that never justifies its existence. The buttoned-down Rapace doesn’t exude much charisma, and McAdams has more of a “Mean Girls” pettiness than the dragon-lady menace that Kristin Scott Thomas brought to “Love Crime,” making her not much of an adversary. But you get the sense De Palma is so busy setting up shots that he doesn’t notice that his characters aren’t connecting.

At least with “Redacted,” De Palma’s controversial found-footage film about the Iraq War, he could be forgiven for at least trying something different. Here, he’s doing the same thing he’s been doing for decades — only not nearly as well.

The Blu-ray edition from EOne Entertainment certainly makes De Palma’s images look good. The only special feature is a featurette that seems aimed at people who haven’t seen the film, not those who have just watched it.

“About Time” opens Friday at Point, Eastgate and Star Cinema. R, 2:03, three stars out of four.

The moment of truth comes early on in writer-director Richard Curtis’ “About Time.” Is he going to be able to sell the audience on the film’s central conceit, that a father (Bill Nighy) and son (Domhnall Gleeson) can travel through time?