“The Canyons” is now playing on iTunes and other VOD services. 1:33, R, two and a half stars out of four.

Paul Schrader’s “The Canyons” opens with still shots of abandoned movie theaters in Los Angeles, their box offices boarded up, the seats oozing stuffing, the maroon carpets littered with trash. It’s as if Schrader expected that movie critics wouldn’t be engaged by the movie, and wanted to get us to tear up at the thought of the death of theatrical exhibition. Low blow, Paul.

But the irony of “The Canyons” is that, outside of its opening in New York and Los Angeles, most viewers aren’t seeing those decrepit images on the big screen, but on their televisions, laptops or iPads. “The Canyons” was released simultaneously on iTunes and other video streaming services on Opening Day, and Schrader, whose long career stretches back to “Taxi Driver” and “Light Sleeper,” seems to be mourning our new anytime, anywhere viewing culture even as he takes advantage of it.

The movie itself isn’t nearly as interesting as this frame, another Bret Easton Ellis tale of rich, soulless young people doing bad things to each other. Hollywood is the backdrop for their machinations, but we rarely see anybody actually working on a movie, or even interested in movies. It’s just something to do, a way to spend their money, in between expensive dinners and three-ways organized via text message.

But, not surprisingly in a movie like this, Christian is awfully possessive for a guy who professes to be such a libertine. When he learns that the actor hired for his movie, Ryan (Nolan Funk), used to date Tara, he psychologically taunts them both. But everyone is deliberately drawn by Ellis as a flat, shiny surface, so it’s impossible and probably inadvisable to care who ends up with whom. The chilly score by Brendan Canning, the deliberate artifice of Schrader’s staging (including having characters look directly into the camera as they say lines), the stiffly delivered dialogue — it all adds up to a deliberately vacuous portrait, a simulacrum of an erotic drama rather than the real thing. 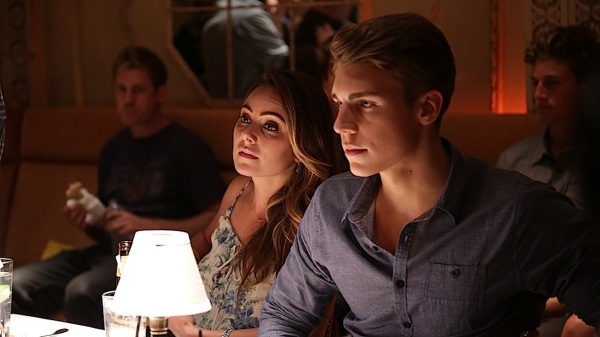 The wild card, in every sense of the expression, is Lohan. Her well-publicized troubles with the law and with herself have drawn plenty of rubberneckers to “The Canyons,” as did an immensely entertaining New York Times Magazine article full of salacious details about the troubled production of the film.

But whether Lohan was late to the set or not, I don’t think anyone can argue she’s not the best thing in the film. Looking simultaneously weary beyond her 27 years, while still retaining vestiges of her “Parent Trap” girlishness, she gives an astonishing live-wire performance, trembling and yet tough, fully engaged in every moment she’s on screen.

The other performers in the film (especially Deen, who is all smirks and poses) simply can’t keep up with her. It’s the difference between a movie star and others who pretend to be. “The Canyons” isn’t a good movie by any stretch of the imagination, but Lohan makes it highly watchable, and is the film’s best inadvertent argument that the movies aren’t dead after all.