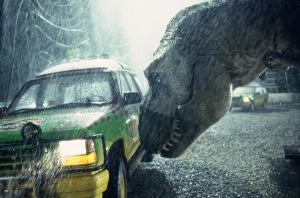 It’s a sad week for movie lovers with the passing of Roger Ebert. Over at the Capital Times, I reposted a 2003 interview I did with Ebert along with a few thoughts about his generosity and his passing. For some, going to see a movie might feel a little strange, especially without a review from Ebert to guide them. For others, what better way to say goodbye; after all, his last written words for us were “I’ll see you at the movies.”

“Jurassic Park 3D” (Point, Eastgate, Star Cinema) — Steven Spielberg’s dinosaur thriller gets a 3D upgrade for its 20th anniversary, but for me, what I still remember about that film was the sound, the roar of the T. rex or the sound of his footsteps growing closer. Definitely one to catch in the theater again.

“Evil Dead” (Point, Eastgate, Star Cinema) — Or “Cabin in the Woods” without the jokes. Folks who only know the “Evil Dead” movies from the jokey last two would be surprised to learn how unfunny and nasty Sam Raimi’s no-budget original was, and this remake seems to follow in those footsteps.

“No” (Sundance) — The best movie out this week is Pablo Larrain’s highly entertaining film about an advertising executive (Gael Garcia Bernal) who devises a campaign to oust Chilean dictator Augusto Pinochet. Inspiring, but wise about the power of television to sway public opinion. Read my full review here.

“Ginger & Rosa” (Sundance) — Elle Fanning convincingly adopts a British accent for this tale of two teens in 1962 London whose friendship is tested both by maturity, and by the threat of nuclear war.

“Lincoln” (6 p.m., Union South Marquee Theatre) — I expected another “War Horse” from Steven Spielberg, a gauzy paean that was as much a monument as a movie. Instead, I found “Lincoln” to be incredibly engrossing and even suspenseful, about a man living at the intersection of myth and mortal, idealism and pragmatism, and trying to pull off an audacious political masterstroke. Free!

Mini Film Festival (6 p.m., Madison Public Library Pinney Branch) — Get your cinematic appetite whetted for next week’s Wisconsin Film Festival with some local films and filmmakers. Ben Reiser will present his feature “The Grapes of Madison,” and Marc Kornblatt will present a pair of his short films. Film festival managing director Christina Martin-Wright will also talk about the films and the upcoming festival. Free!

“Tchoupitoulas” (7 p.m., UW Cinematheque) — Fittingly following on the heels of two films by documentary filmmaker Shirley Clarke, this film blurs the line between narrative and documentary, following three young brothers who spend the night soaking up the sounds and sights of New Orleans after they miss the last ferry home to Mississippi. Free!

“Footnote” (9:30 p.m., Union South) — The Coen Brothers must be kicking themselves for having not made this wry Israeli comedy, about rival Talmudic scholars who also happen to be father and son. When one gets an award meant for the other, chaos ensues. My full review is here. Free!

“Pulp Fiction” (midnight, Union South) — Come on, it’s a midnight screening of “Pulp Fiction.” What else need be said? I will say that there are a few moviegoing experiences I remember vividly as experiences, and one of them was being packed into a sold-out theater on opening night for “Pulp Fiction” (I even remember where I was sitting — front row, left side) and coming out of that theater feeling like I had been pleasantly electrocuted. (“Django” gave me a similar rush.) Free!

“Ocean Waves” (2 p.m., UW Chazen) — I’m guessing the nicer weather won’t slow the crowds for the wildly popular Studio Ghibli series at Cinematheque at the Chazen. This weekend, it’s a tender coming-of-age story never seen on home video in America, about two school friends who find their bond tested by the arrival of a new transfer student. Free!

“Half the Sky — Part 2” (7 p.m., Union South) — Catch the second half of the full version of the PBS documentary, in which New York Times columnist Nicholas Kristoff joins some famous actresses in traveling to the third world and seeing how women and girls are fighting for change there. Free!

“Trigger” (7  p.m., Union South) — This documentary looks squarely at gun violence — what really causes it, what the impact really is, and how it can be stopped. Filmmaker David Barnhart will be at the screening and will take part in a post-show panel discussion. Free!

“Ferris Bueller’s Day Off” (8:30 p.m., Majestic Theatre) — The Majestic picks the best day of hooky ever for its latest Brew ‘n’ View. Admission is $5.

Wisconsin Film Festival — The eight-day festival kicks off at several on-campus venues tonight and then expands to Sundance for the weekend. Watch this space for lots of previews and reviews, and follow me on Twitter (@robt77) for even more.

With the UW still on spring break, it’s a pretty dead weekend for movies around town. Things will pick up again during the middle of next week, but take heart — the Wisconsin Film Festival is less than two weeks away!

“The Host” (Point, Eastgate, Star Cinema) — Having come to the end of her “Twilight” movies, Hollywood attempts to continue author Stephenie Meyer’s winning streak with this sci-fi film about aliens who control minds, and the ragtag group of hot teenage rebels fighting them. It’s adapted and directed by Andrew Niccol, which could be great news (“Gattaca”) or awful (“In Time”).

“GI Joe: Retaliation” (Point, Eastgate, Star Cinema) — Dwayne Johnson continues his successful strategy of jumping into sequels to movies he wasn’t in (“Fast and Furious,” “Journey 2 the Mysterious Island”) with this action sequel. Bruce Willis is also in there, and the shocking thing is that this is probably better than the last “Die Hard” movie.

“Tyler Perry’s Temptation” (Point, Eastgate, Star Cinema) — Tyler Perry’s temptation is that he can’t resist putting his name above the title. His latest is an attempt at “Fatal Attraction”-style romantic thriller about a woman who strays outside her marriage. Perry obviously wants to make a message about the importance of fidelity and taking marriage seriously — which is why he cast Kim Kardashian in a supporting role.

“The Gatekeepers” (Sundance) — This illuminating Oscar-nominated documentary looks at the heads of Shin Bet, Israel’s secret service, as they tell the inside story of 40 years of counter-terrorism. It’s a fascinating look as well as a sobering reminder of how futile even a well-managed occupation ultimately is.

“Like Someone in Love” (Sundance) — After filming “Certified Copy” in Italy, legendary Iranian director Abbas Kiarostami moves to Tokyo for this drama about a call girl and the three men in her life. My review is here.

“Casablanca” (Sundance) — Come on, it’s “Casablanca,” only one of the most quoted (and misquoted) movies of all time. If you know it only by reputation, check it out — it’s actually a highly entertaining melodrama, full of colorful characters, intrigue and a wounded romanticism. Not only is it a great film, it’s a good one, too.

“The Fade” (Union South Marquee Theatre, 7 p.m.) — This intriguing-sounding documentary looks at a week in the life of four barbers, all either African or of African descent, in America, Britain, Ghana and Jamaica. Free!

“Lincoln” (Union South, 6 p.m.) — I expected another “War Horse” from Steven Spielberg, a gauzy paean that was as much a monument as a movie. Instead, I found “Lincoln” to be incredibly engrossing and even suspenseful, about a man living at the intersection of myth and mortal, idealism and pragmatism, and trying to pull off an audacious political masterstroke. Free!