“Between Us” screens Monday through Thursday at Point and Eastgate Cinemas, check marcustheatres.com for showtimes. R, 1:30, two-and-a-half-stars out of four.

Most dramas would be content with one disastrous evening that ruins the obliterates the friendship between two couples, but Dan Mirvish’s “Between Us” opts for two. By the end of it all, I’m guessing nobody’s getting a Christmas letter this year.

A brief prologue shows the friendship that once was, between two talented photographers and their wives, Carlo (Taye Diggs) and his wife Grace (Julia Stiles), and Joel (David Harbour) and his wife Sharyl (Melissa George). In grad school, the photographers were inseparable, even as their friendly rivalry laid the groundwork for recriminations to come.

In the first dinner party, Carlo and Grace are invited out to the gigantic exurban home of Joel and Sharyl. Joel has “sold out” and made a fortune in advertising, “spending 113 billable hours trying to get honey to drip just right off a granola bar.” He’s filled with self-loathing, with extends to loathing everyone in his life, including the tightly-wound Sharyl.

The second dinner party — really more of an extended argument over milkshakes — happens a couple of years later. Joel has found some measure of inner peace, possibly religious-driven, and he and Sharyl have come back to New York to make amends. Only now Carlo and Grace are the ones at each other’s throats — Carlo’s run out of high road in his pursuit of being an art photographer, and living in New York has put the couple massively in debt.

Instead of presenting these scenes sequentially, the film cuts back and forth between them, creating mirror images of tension. Some may complain that it’s essentially a stage play on film, but limiting the locations and keeping the interest squarely on the characters works to its benefit — whenever Mirvish tries to break the theatrical mold, such as in a dream sequence where Grace imagines visiting Brazil, the momentum of the film dissipates. 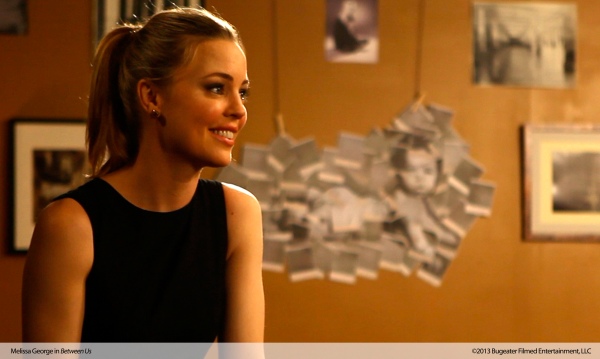 The dialogue gives the actors plenty to dive into, like a doubles match Neil LaBute play, and the performances are uniformly strong. Diggs finds layers of resentment and insecurity under his cool-guy exterior, and between this and “Silver Linings Playbook,” Stiles is coming close to perfecting the brittle spouse role. But it’s the lesser-known Harbour who steals the show, consumed by self-hatred in one scene, touchy-feely entitlement in the next, but all the while somewhat amused at the predictable downward arc his life has taken.

It’s the script that lets these four actors down, shifting the characters from real humans to broad types and back again. Every time we think we’ve gotten to something real, the screenplay inserts a “This is what a rich person would say” or “This is what a New York boho would say” line that pulls us back out. “Between Us” is a showcase for great actors who could have used more consistent material to springboard off of.