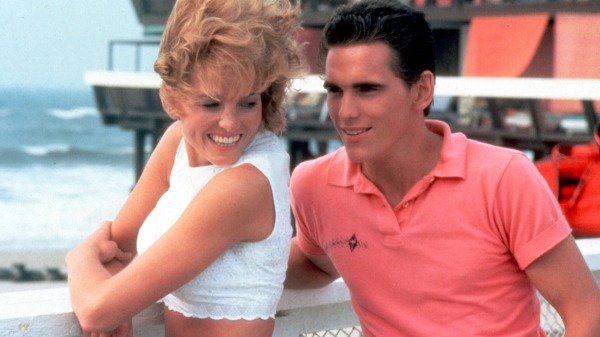 Garry Marshall once quite a TV writing job as a young man because he wouldn’t write what the producer called “schmunny” – i.e. schmaltzy and funny. Ironic, of course, since schmunny would sum up most of Marshall’s career as a director, sometimes tipping towards funny (“Overboard”), oftentimes tipping towards schmaltz (“Beaches”), but always somewhere in between the two.

His second film, 1984’s “The Flamingo Kid,” gets the balance just right, although I’d call it sentimental and nostalgic, but not schmaltzy. The underrated gem may get a second look now that it’s being turned into a Broadway musical next year, and is out this week in a new Blu-ray edition from Kino Lorber.

“Flamingo Kid” was part of a run of nostalgic ‘80s movies about the late ‘50s and ‘60s that included “Diner,” “Stand By Me,” “Dirty Dancing” and many more. But it stands on its own as a charming, effective film. I remember seeing it over Christmas Break in 1984 and thinking that I liked it much more than I expected to and that, for a teen comedy, the adults were far more interesting than the usual authority figure stereotypes we were getting then.

After playing several brooding roles in “Over the Edge,” “My Bodyguard” and “The Outsiders,” Matt Dillon was an unlikely choice to play the movie’s charismatic and earnest young protagonist. Jeffrey Willis is the king of his middle-class Brooklyn neighborhood in the summer of 1963, swaggering around in his porkpie hat. But he’s a fish out of water when he goes to work parking cars at a swanky private club on Rockaway Beach.

He falls under the sway of one of the club bigshots, a crude car dealer named Phil Brodie (a great Richard Crenna), who gets him bumped up to cabana boy and promises a future as a car salesman.  Jeffrey’s idolization of Phil puts him in conflict with his own gruff working-class dad (Hector Elizondo, a good-luck charm for Marshall, in his best role). A nice detail: while Phil is rich enough to lounge by the sea and probably own a boat, Jeffrey’s dad is a nautical lover who has to satisfy himself with building model boats in the living room and getting seafood at the local “Fishouse.”

It all gets resolved pretty neatly, but “Flamingo Kid” has an easygoing, unhurried charm, lingering on the details of life at both the country club and in Jeffrey’s old neighborhood. The cast is uniformly strong, with Dillon unexpectedly showing a knack for physical comedy as he awkwardly navigates the fancy soaps and folding chairs of the country-club lifestyle. Add in some blink-and-you’ll-miss them appearances from future stars Marisa Tomei, John Turturro and Steven Weber, and “Flamingo Kid” is a sweet and satisfying film. The totally ‘80s and totally anachronistic theme song by the guy who sang the “Full House” theme can beat it, though.

The Kino Lorber disc comes with another engaging commentary track from UW-Cinematheque director Jim Healy and his brother, actor and filmmaker (“Take Me”) Pat Healy, who tell stories from Marshall’s memoirs about the production of the film and plenty of other tidbits, including that “schmunny” story at the top of this review. The brothers say that recording the commentary track enhanced their appreciation for the movie, and listening to it did the same for me.