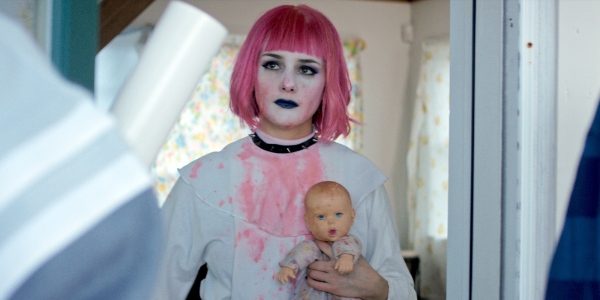 “Little Sister” screens at 7 p.m. Wednesday at the Madison Museum of Contemporary Art, 227 State St. Tickets are free for museum members, $7 for all others. Not rated, 1:31, three stars out of four.

It’s a little disconcerting to see a film that’s a period piece set only eight years ago, sparking a feeling of “Didn’t that just happen?” Zach Clark’s “Little Sister” is set in the fall of 2008, and the cultural signifiers are everywhere – candidate Obama’s speeches on television, talk of Iraq. There’s even a scene featuring a performance art piece with a dancing Twin Towers.

But Clark’s film uses the moment as a backdrop for a funny, wistful little comedy-drama about family members learning to overcome themselves and reconnect with each other. Can we reconcile with those who know us only too well? Yes, we can.

Colleen (Addison Timlin), a prim novitiate nun who lives in a Brooklyn convent, helping the poor and studying her Bible. But her life isn’t as serene as it appears; in an email from her mother Joani (Ally Sheedy), we see that Colleen has broken off all contact with her family back in North Carolina for the past three years.

Joani is finally able to lure Colleen home with the news that her older brother Jacob (Keith Poulson) is home from his tours in Iraq. Colleen decides to borrow the car from her convent’s Mother Superior, played by scream queen Barbara Crampton in a very funny small role. “It took six days for God to create the world,” says the Mother Superior, handing her the keys. “You should be able to get your act together in five.”

Once home, we start learning more about Colleen – it turns out that, prior to her life in a nunnery, she was heavily into goth, listening to GWAR and wearing deathly makeup. Once home, she slowly starts slipping back into that persona, partially out of habit, partially to connect with Jacob, who is physically disfigured and emotionally traumatized by war.

Clark observes these characters with wry empathy, even the overbearing Joani, an aging party girl who keeps the house well-stocked with pot and ‘shrooms from a nearby family farm. Colleen’s pledge to piety and celibacy may be the ultimate rebellion against such a parent.

The film pairs bucolic imagery and still framing with a rumbling soundtrack featuring manic drum solos and droning synthesizers, suggesting the turbulent emotions churning beneath the surface. But instead of going for big melodrama, “Little Sister” revels in quieter moments of connection, especially between Colleen and her brother. Despite their very different outward appearances, they slip easily into the unspoken common language of siblings.

The performances are all finely observed, and “Little Sister” moves towards emotional uplift without schmaltz or sentimentality. The film ends with a Halloween party in which everywhere dresses up in costumes while revealing themselves to each other. It’s an open-hearted with no tricks up its sleeves, only treats.