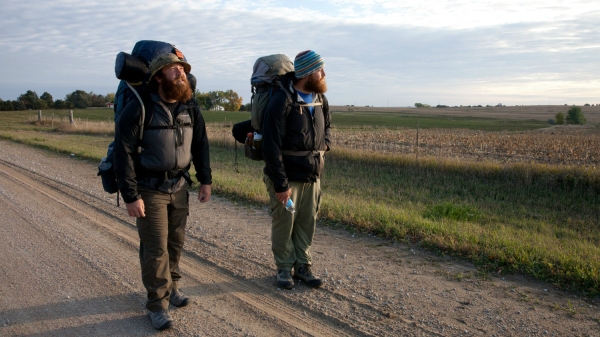 First up was “Almost Sunrise,” an express “advocacy documentary” meant to raise awareness, with the film being on the vanguard of an overt campaign to raise awareness and get action on a specific issue. In this case, the “issue” was the mental anguish that many Iraq and Afghanistan war veterans feel upon returning to the United States. Most have heard of post-traumatic stress syndrome, but a lesser-known but more prevalent problem is “moral injury,” a broad term used to describe the guilt and shame many veterans feel over what they had to do while they were in-country.

Michael Collins’ “Almost Sunrise” follows two Iraq veterans, Tom Voss and Anthony Anderson, both suffering from moral injury, leading to substance abuse, alienation from loved ones, even suicidal thoughts. In an attempt to deal with their damaged psyches, as well as raise awareness about veterans’ mental health issues, the pair embark on a five-month walk from their native Milwaukee to California.

In many ways, the 2,700-mile walk is an easier one to take than the long road back from emotional trauma. As the men walk, and talk with veterans and others who walk with them, you can see them start to unclench, open up a little to the world around them. But it’s not easy; while Anderson emerges from the journey reinvigorated and ready for change, Voss is still struggling, and only finds his breakthrough months later at a mindfulness and meditation retreat.

It’s a beautiful, empathetic film, prompting plenty of tears both on screen and in the audience at the Oriental. While the focus of headlines and cable news has moved away from Iraq and Afghanistan, “Almost Sunrise” serves as a reminder of what the veterans of those wars are still grappling with. The film provides a valuable chance to walk in the shoes of men we might not otherwise get to know.

Kristen Johnson’s “Cameraperson” is a daringly different documentary in terms of form, but provides much the same service of helping us see and understand others. Johnson is a veteran cinematographer who has traveled the world shooting documentaries, and she presents “Cameraperson” as a “memoir,” “the images that have marked me” she writes in a brief onscreen introduction.

At first, the film seems like a scrapbook of footage Johnson has shot over the years. The location is often provided, but nothing else, not even the year the footage was shot. A farmer in Bosnia. An amateur boxer in Brooklyn. A CIA “black site” in Yemen. Johnston’s own mother, who has Alzheimer’s. A hospital in Liberia, where a harried doctor has delivered one baby and trying calmly to save the oxygen-deprived twin. Johnston’s own baby twins.

Writing them out in a list like that, one can start to see where the images will connect and rhyme with one another. But watching “Cameraperson” is another experience entirely, as what seems like a random assemblage crystallizes into a finely-constructed mosaic of the human condition. Beauty and ugliness, kindness and cruelty, anger and peace, it all exists side by side, and sometimes inside each other. Returning to Bosnia years later after making a documentary about mass rapes committed there, Johnson confesses to the family she filmed that what stayed with her isn’t the atrocities, but the beautiful landscape and the warmth of the people.

And that’s the key to “Cameraperson.” In few other documentaries have we ever been so aware of the person behind the camera, choosing what to show us and what to leave out. Sometimes these choices are explicit – we see Johnson setting up a shot, getting just the right angle, composing within the frame.

But, more importantly, it’s about what Johnson chooses to film and not to film, to see and not see, whether the camera follows the nurse as she hustles out the room for help or holds on that newborn baby, gasping for life. Woven together with Johnson’s own life, her mother at the end of her life and her children at the beginning of hers, this is autobiography in its truest form, a visual document of choices made and chances taken, and missed. It’s wonderful.

Finally, “The Legend of Swee’ Pea” is an example of straight-up biographical storytelling, a sports documentary about a fascinatingly flawed individual and the choices he took and missed. The word “legend” in the title is carefully chosen – Lloyd ‘Swee’ Pea” Daniels was such a phenom on the basketball courts of New York City as a teenager that he attained an almost mythic reputation, maybe the most among those who never got the chance to see him play.

A stellar college and NBA career seemed assured, pulling a young man out of poverty. But Daniels had an almost equally masterly gift for self-sabotage – a highly touted recruit at UNLV, Daniels never even made it onto the court before he was busted for buying crack cocaine, and subsequently bounced from the university. He did end up playing a few years in the NBA in the 1990s, thanks largely to the mentorship of former UNLV coach Jerry Tarkanian. But he was just a pretty good, erratic player who never lived up to the legend.

Benjamin May’s film follows the now 49-year-old Swee’ Pea, a basketball coach who lives in hotels and goes back to Vegas to go on benders. (Drugs he swears he gave up, but alcohol not so much.) The portrait is a clear-eyed but not unsympathetic one of a man who was exploited and exploited others in turn, and though he sometimes stops his constant stream of chatter to recognize the tragedy of his life, it’s not clear whether he’s learned anything from his mistakes.

Director Benjamin May said he experienced the rollercoaster of being close to Daniels firsthand – in the movie, we hear voicemail messages of Daniels cajoling the director for $200 and getting angry when he doesn’t get it. (May said the filmmakers paid towards Daniels’ kids’ college education as a form of compensation.) Even the Milwaukee Film Festival itself got pulled into Daniels’ orbit — the festival had bought him a plane ticket to attend the screening, but got caught up in Daniels’ constant demands and equivocating, and the deal end up falling through.