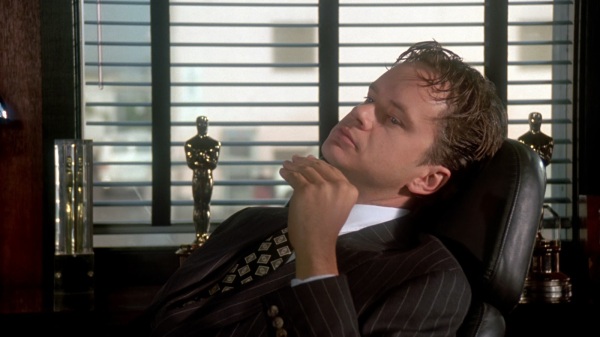 What would Griffin Mill think of today’s Hollywood? In Robert Altman’s 1992 satire “The Player,” Mill (Tim Robbins) is the boy-king of an compromised Hollywood, ruthlessly steamrolling the desperate pitches of screenwriters, plucking a few that he can turn into acceptable multiplex pablum.

Today, original movie pitches seem almost quaint; it’s all about reboots and remakes, putting a CGI gloss on something familiar. Or better yet, make every movie conform to a larger brand, like products on an assembly line, each feeding back to the same rapacious beast. The studio comes up with the idea now, and hires hungry writers and an unproven director to get it done. Of all the pitches we hear in “The Player,” Buck Henry’s idea for “The Graduate 2” might get through. But Mill would be sacked — probably by the studio’s Chinese owners — if he let anything remotely original get made, sappy happy ending or no.

So, looking back on “The Player,” just released in an extras-packed Blu-ray by the Criterion Collection, it’s a film that feels almost nostalgic for the moral rot of yesteryear, which now seems almost innocent. Altman made the film, based on Michael Tolkin’s novel, after a decade on the outs from Hollywood after the failure of his 1981 “Popeye.” That his re-entry back into Hollywood’s good graces, kicking off his the astonishing and prodigious final decade of his career, came through a delightful caustic Hollywood satire must have tickled the old man to no end.

He bit the hand before it fed him. But because “The Player” made money, they didn’t care.

The film begins, of course, with that amazing 10-minute tracking shot that zooms in and out of the offices, parking lots and sidewalks of a Hollywood studio. It’s a shot that feels both meticulously choreographed and naturalistic, as if the camera was just Altman’s eye roving here and there, looking for what’s interesting. (In the documentary “Planned Improvisation,” Altman’s son Stephen, who was production designer, remembers his father smoking a joint and playing with Tonka trucks as he mapped out the shot.)

Eventually, of course, what’s interesting is Griffin Mill (great name for a studio executive, suggesting a factory that produces magical creatures). In Robbins’ canny performance, Mill is both hero and villain for us, the guy we root for even as we see him crushing those around him to get what he wants. The film has a noir plot — Mill has killed an arrogant writer (Vincent D’Onofrio) who he thought was sending him harassing postcards. That’s a lot of fun, a throwback to the old movie posters that decorate the offices of the studio. (There’s also a great joke in the murder scene, where Mill drowns the writer in a puddle of water, lit red by neon lights to look like developing fluid in a darkroom.) 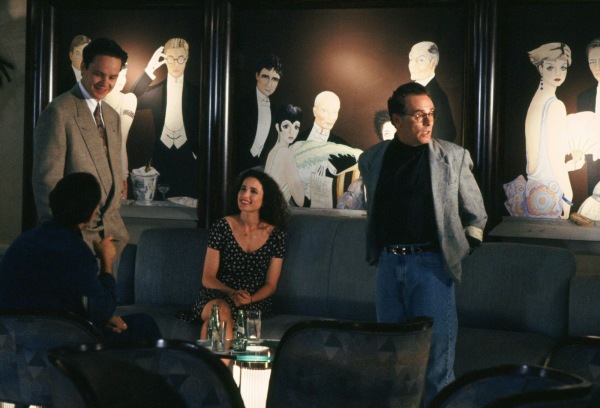 Altman stuffed the film with celebrity cameos — in one party scene, we see Jack Lemmon, Robert Wagner, Jeff Goldblum and Harry Belafonte among the faces in the background. (Many more stars, including Jeff Daniels and Patrick Swayze, didn’t even make the cut, but appear in deleted scenes on the disc. Another feature, “Maps to the Stars,” points out all the cameos in the film.) Some of the fun watching the film now is seeing, say, Peter Gallagher, John Cusack and Angelica Huston having lunch together and not being sure at first who is playing themselves and who isn’t. Almost nobody (except maybe a preening Malcolm McDowell) carries himself like the public’s idea of a movie star — this is a company town, and they all just hang together and have lunch.

Some aspects of “The Player” haven’t worn as well over time — Greta Scacchi’s character, the dead writer’s girlfriend who Mill seduces, seems to have the emotional development of a child, a screenwriter’s idea of what a desirable woman is like. And, of course, the film pulls a massive bait-and-switch in its noir plot, as the forces that have arrayed against Mill suddenly vanish, as if he was able to get a script rewrite of his own life.

But maybe that’s the point, as life, the movie and the movie-within-the-movie all blur together in Griffin’s world. In “The Player,” Altman creates a scathing satire of Hollywood — and then lets his satire itself gets seduced by Hollywood schmaltz. Because what better way to show how seductive it is?