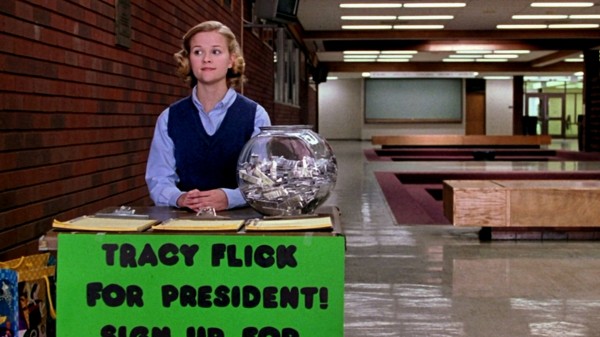 Netflix giveth, and Netflix taketh away. The streaming service quietly drops a few titles at the beginning of every month, and the “Gone in an Instant” column lets you know so you can get that last-minute binge in.

Lately, Netflix has started getting rid of a few titles at the first of the month and then sneakily deep-sixing a few more throughout the month. Perhaps they think if they spread the pain out a little bit it won’t sting so bad? Either way, make sure to catch them before they’re gone.

“Election” (May 1) — In an election year, we need Alexander Payne’s sly adaptation of the Tom Perrotta novel about a contested high school election and the schlubby teacher (Matthew Broderick) who inserts himself into the process. Just so when pundits refer to a candidate as a “Tracy Flick,” everybody will know what they mean.

“The Animatrix” (May 1) — Better than the two sequels to “The Matrix” is this animated collection of short films set in the Matrixverse.

“Kiss of Death” (May 1) — This satisfyingly gritty 1995 thriller stars David Caruso (pre-sunglass puns) as an ex-con enlisted by the feds to bring down crime boss Nicolas Page (pre-self parody).

“The Score” (May 11) — I’m a big fan of Frank Oz’s 2001 heist thriller, in which Robert De Niro plays an aging thief who reluctantly enlists a hotshot (Edward Norton) to steal a priceless artifact from a Montreal customs office to help out old friend Marlon Brando.

“Blade Runner: Theatrical Cut” (May 16) — The voiceover-free director’s cut of Ridley Scott’s 1982 sci-fi dystopian noir is obviously preferred to this studio-altered version, but now we won’t even have that.

Also leaving Netflix in May: “The Ladykillers,” “Ida,” “Black Hawk Down,” “Clerks,” “Escape From Tomorrow.”