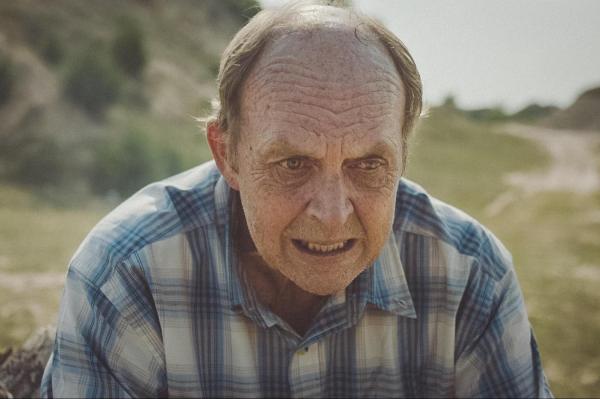 It’s a standard bonus feature on a DVD. The director or the screenwriter gets interviewed about the making of the film. Sometimes it’s in the context of a polished featurette, other times it just seems like raw Q&A footage from the set. The interviewer is usually unseen and often unheard.

But the makers of “Uncle John” (my review is here) tried something a little different for the DVD release of their rural thriller, out this month from Kino Lorber Films. They turned interviewing duties over to their moms.

“Explaining Micro-Budget Filmmaking To Your Mother” is a 12-minute featurette in which writer-director Steven Piet and writer-producer Erik Crary sat down with their moms, Sharon Piet and Kris Crary, to talk about the making of the film. (Full disclosure: Kris Crary works at the Wisconsin State Journal, and she’s a delightful person.)

Talking to your mom about indie filmmaking sounds like it would be sort of cutesy, but it’s actually a fun and insightful conversation. And very fitting for “Uncle John,” which was indeed a micro-budget feature that relied heavily on the kindness and resources of family and friends to be finished. Half the film was shot in Lodi, Wisconsin, where Crary is from, following a seemingly benign farmer (John Ashton in a role that’s a revelation for the “Midnight Run” character actor) who is trying to cover up an unthinkable crime.

The other half was shot in Chicago, where the farmer’s nephew (Alex Moffat) is a bright young graphic designer pursuing romance and career. The two very different strands of the movie — two different movies, really — weave together in the third act, when the nephew comes back home. It’s an ambitious idea for a low-budget drama.

The interview weaves in details of Piet and Crary’s process, as they used locations they knew they could have access to, and thoroughly planned and storyboarded every scene so that they wouldn’t waste a moment (or a dollar) when it came time to shoot. There’s some behind-the-scenes footage of the shoot, and Piet and Crary talk about their process for incorporating actor improvisation into their scenes, and their moms comment wryly on their very different personalities (“I thought you were going to have a heart attack!” Sharon Piet tells Crary, who evidently carried the load of production details through the shoot, giving Piet the space to focus on directing.)

“Uncle John” feels very much like a homegrown film, and the chatty interview captures the feel of the filmmaking process as well as some of the details of Crary and Piet’s partnership. “I’m just curious to see what the next one’s going to be,” Kris Crary tells her son. “And I’m hoping it’s not in our house.”

The “Mother” featurette is also available as a bonus if you buy the movie on iTunes, and it’s also streaming at Netflix and Hulu.