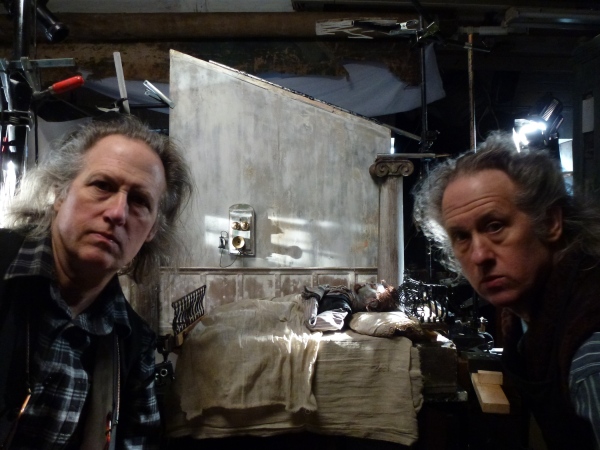 If the “FREE” box at an estate sale became possessed by a demon and began to make art, the result might look something like a Quay Brothers short film. The famed brothers work in miniatures, bringing broken dolls and misshapen puppets to chilling life in a pocket universes of rusty gears, peeling paint and dirty mirrors.

In a sense, one describes the distinctive look of a Quay Brothers film as a defense against sinking into the nightmarish themes of the films; we have only the barest sense of what’s happening, only that it seems wrong somehow, very wrong. And in their tiny, precise movements, the puppets on-screen feel queasily lifelike, even familiar.

Director Christopher Nolan (“The Dark Knight,” “Memento”) remembers being enraptured by the Quays’ “Street of Crocodiles” when he saw it in an animation anthology on British television in the early 1990s. It sparked a fascination that continued throughout his career (he cops to borrowing from the Quays, as so many filmmakers have, in 2006’s “The Prestige”). Earlier this year he shepherded a touring 35mm retrospective of the Quays’ films, and now comes a high-def transfer on Blu-ray from Zeitgeist Films.

The disc contains four hours of films, and diving into them is an immersive and unsettling experience. “Crocodiles,” considered the brothers’ highwater mark, is a fully realized little universe, where screws burrow into the ground like earthworms, doll-headed puppet tailors perform grisly suturing, and, behind a smeared pane of glass, a monkey doll madly bashes his cymbals. The effect is like that of a half-remembered dream, both specific and vague in recollection.

“The Unnameable Little Broom” retells the tale of Gilgamesh with a patchwork bird puppet, a diorama with broken tennis rackets hanging from wires, and a malicious little dresser with a nasty surprise in one drawer. Later films, such as 2013’s “Unmistaken Hands,” seem to show the brothers moving closer to pure abstraction. But it’s dangerous to try and chart any sort of linear progression in their work; each film is its own little world, obeying its own laws and logic that only the Quays seem to understand.

The brothers have provided insightful, even amiable commentary for about half the films on the Blu-ray; I found it best to watch the film first, thrillingly lost in the images, and then go back again a second time with the Quays as a guide. (They’re surprisingly eager to explain what’s going on in such cryptic films.)

The other big extra on the Zeitgeist disc is an eight-minute show film, “Quay,” by Nolan himself, shot on a visit to the brothers’ studio in London (they’re American, but have lived in Britain since they attended college there). The brothers reveal some of the secrets of how they achieve the look of their films, joking (perhaps?) that they get their mirrors properly dirty by washing their underwear in the sink and dunking the mirror in the dirty water. They also add a little olive oil to the eyes of the puppets to make them glisten with life; “The soul of the puppet is highlighted in the eye.”

We see and hear nothing of the Quays’ life outside this studio, nothing beyond the painstaking work of assembling and moving puppets through the worlds they create. In essence, Nolan presents the Quays’ studio as yet another self-contained world, just like the ones they build, and there couldn’t be a more reverent tribute to these two utterly singular artists than that.