“Fidelio: Alice’s Odyssey” has its Madison premiere on Wednesday at 7 p.m. at the Madison Museum of Contemporary Art, 227 State St. Not rated, 1:37, two and a half stars out of four. Tickets are free for museum members, $7 for non-members.

“Fidelio: Alice’s Odyssey” opens with an idyllic scene in which lovers swim naked in a secluded cove. The woman, Alice (Ariane Labed) is about to leave for the sea, and the man, Felix (Anders Danielson Lie), draws a picture of her as a mermaid, swimming merrily off as he sobs on the shoreline.

But Alice doesn’t grow scales and a tail, but takes on the shapeless overalls of an engineer on a massive freighter, where she is the only female on board. That opening scene reminds us that, in a world surrounded by men, she is still a woman, which brings a host of complexities on board. It becomes ironic that the ship she’s assigned to is named “Fidelio,” as fidelity turns out to be something of a problem for her.

Directed by Lucie Borleteau, “Fidelio” is an engrossing but somewhat thin character study of Alice, carried immensely by Labed’s luminous performance. The Greek actress looks a little like Marion Cotillard, and has a similar deftness with conveying her characters’ emotions through tiny, precise movements, going from strength to vulnerability with just a slight furrow of the brow or tremble of the lip. Borleteau keeps the camera in tight on Labed’s face, letting us observe her as she navigates stressful personal circumstances, clouds passing over her heart and then dissipating.

It turns out the “Fidelio” was where Alice had her first assignment, and she had an affair with the handsome crew chief Gael (Melvil Poupaud). Gael is now captain of the Fidelio, and Alice discovers that while the old ship may be on its last legs, her feeling for Gael are as strong as ever. She begins an affair with him while on the months-long voyage, telling herself it’s just a shipboard thing, and that her heart still belongs to Felix. 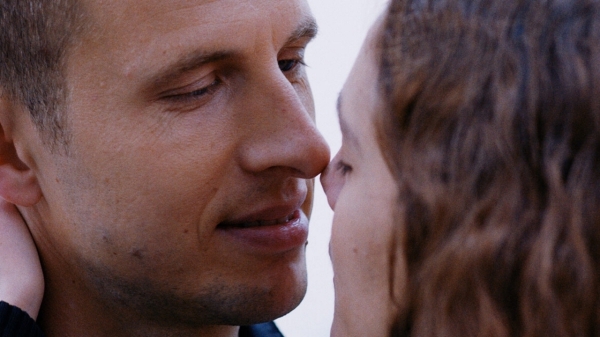 It’s not that simple, of course, but it’s not much more complex than that either, and while “Fidelio” flirts with making deeper statements about male/female working relationships, or working relationships in general, at heart the movie boils down to a basic love triangle. The film is as sexually and emotionally frank as Alice is, presenting her infidelities without judgment. But the tedium and ugliness of the ship begins to take its toll on the viewer as much as on the crew, as Alice’s dilemma drags on for many months.

Some of the scenes of shipboard life are well observed, especially how the job brings together an international crew who must learn to get along in close quarters together. And there’s a whiff of poignancy and mystery involving a crew member who died under mysterious circumstances just before Alice gets on board; she discovers his diary, which is heard in voiceover throughout the film.

“Fidelio” is well-shot and wonderfully acted, especially by Labed and Lie (“Oslo August 31”). There’s no way we won’t be seeing her in bigger movies from here on out. But at the end of the film, the aging ship is “tramping” from port to port looking for a purpose, and the film is doing much the same.