“No Escape” opens Wednesday at Point, Palace and Star Cinemas. R, 1:43, two and a half stars out of four

It was not surprising to me to learn that “No Escape” filmmakers John Erick and Drew Dowdle has made horror films up until now (“Devil,” “Quarantine”). Because, although presented as an action thriller, “No Escape” is really a horror film at heart, the Dowdles effectively using the tricks of the trade to build suspense and dread in the viewer. It’s just that, instead of a serial killer or a demon, the boogeyman this time is an entire country.

This makes for a film that’s queasily effective in the moment, gripping us as the Dowdles tighten every turn of the screw. But it also makes for a film that tilts a little too close to xenophobia for comfort, and also goes unpleasantly too far in putting innocents (especially children) in deadly peril. A horror film might get away with that, but a movie that’s ostensibly about a family bonding in the face of adversity can’t.

Jack (Owen Wilson) is an engineer who has brought his family — wife Annie (Lake Bell), and daughters Beeze and Lucy (Claire Geare and Sterling Jerins) — to an unnamed South Asian country (the film was shot in Malaysia, but the country in the film shares a border with Vietnam). Jack is working for a multinational corporation to upgrade the city’s water plant, but when they arrive at the airport, there’s nobody there to visit them. Things seems a little off elsewhere — the power at the hotel favored among foreigners is spotty, and the concierge at the front desk seems a little on edge.

The next morning, Jack is taking a stroll when he finds himself in the middle of a violent conflagration between riot police and angry protesters. It’s here that “No Escape” tips its hand; instead of seeing police brutally cracking down as we do on the evening news, we have shots of protesters beating helpless officers to death with clubs and rocks. “No Escape” wants to remain largely apolitical, but it’s telling that the film wants to paint the insurgents as sadistic villains, the U.S.-backed government as helpless victims.

The rebels overrun the hotel and begin executing foreigners on sight, and Jack and Annie must try and get their family to safety. The Dowdles (Troy Erick directing, Drew producing, both co-writing) are very skilled at keeping the audience engaged, as the family has to stay a few steps ahead of the mob. Casting Bell and Wilson, generally known for comedy, against type as the parents is effective, getting us to believe that they’re not action heroes but scared, flawed people in a terrifying situation.

The Dowdles are especially good at using silence to build tension; one of the most nerve-wracking scenes is just a shot of Wilson, panting, in an elevator as he tries to figure out what to do. The score by Marco Beltrami and Doug Sanders even avoids the usual sudden stings and pounding horns for low-level, insidious percussion and bells. 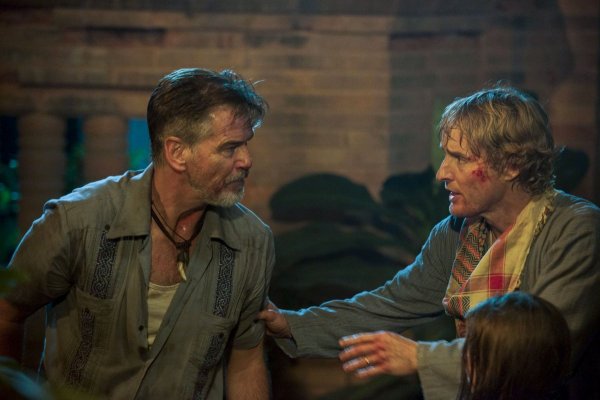 But the film wobbles in tone; we’ll see the family caught in dire circumstances, dead bodies all around them, with the daughters witnessing truly awful things. (There’s a scene later in the film involving one of the girls and a gun that is truly offensive.) The Dowdles want credit for not flinching from such realism, only to let the characters be rescued at the last minute in a movie-movie way that defies belief. That rescue often comes from a shady British expatriate (played enjoyably by Pierce Brosnan doing his Ray Winstone impression) who pops up at just the right times.

Brosnan also has a speech that provides the only political nuance in the film, suggesting that the uprising might be the justifiable result of Western corporations meddling in third-world affairs for their own profits. It’s a weird, awkward stab at complexity that doesn’t square at all with the sadistic glee the rebels show in slaughtering innocents. “No Escape” works, certainly, and I found myself roped in to the family’s plight until the end. But it left me with an unclean feeling, and wondering if the real sadists weren’t on screen, but behind the camera.