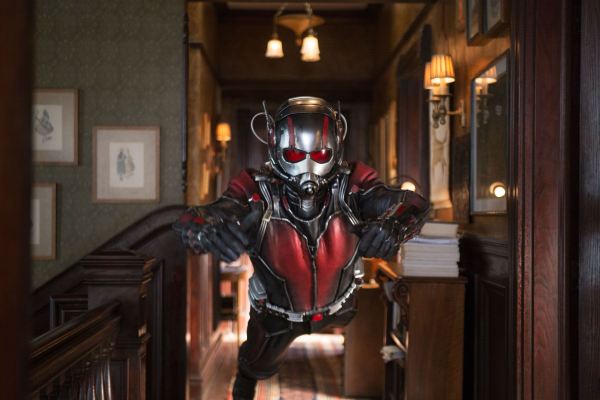 If you’re worn out by superhero movies featuring apocalyptic battles in which cities are leveled and entire countries are lifted into space, may I present “Ant-Man,” in which the climactic showdown takes place aboard a Thomas the Tank Engine train set. And not even a particularly elaborate one.

As one would expect of a Marvel movie starring Paul Rudd, co-written by Edgar Wright and Adam McKay and directed by Peyton Reed (“Down With Love”), “Ant-Man” is much funnier than its caped competitors (it’s in every way the anti-“Man of Steel”). But, even more refreshingly, it’s a necessary corrective to the increasing visual and narrative bloat of the entangled Marvel franchise, with its overlapping characters and overarching storylines. Here, the story is simpler and cleaner; much like the original “Iron Man,” the visual effects are balanced by, and perhaps even overshadowed by, the charm of the actors.

Rudd plays Scott Lang, a small-time thief with a Robin Hood complex (at least as far as “steal from the rich” goes) who is just out of prison with little prospects for the future. His ex-wife (Judy Greer, criminally underused this summer between this and “Jurassic World”) is marrying an arrogant cop (Bobby Canavale) who wants to keep Scott from his daughter Cassie (Abby Ryder Fortson). As a felon, he can’t even keep a job at Baskin-Robbins, and his old crew (including a delightful motormouth Michael Pena) are trying to pull him back into his bad old ways.

Salvation comes in the form of Dr. Hank Pym (a marvelously acidic Michael Douglas), a brilliant scientist who was the Ant-Man many moons ago, but hid the technology for fear it would fall into the wrong hands. What can an Ant-Man do, you ask? He can shrink down to the size of an ant, natch, but the kicker is that he retains the strength and power of a 200-pound man. So he’s like a little bullet, zipping around and knocking out bad guys. Oh, and if that wasn’t enough, he can control ants with his mind. Because if you’re name is already Ant-Man, you’re not going to leave that superpower to another hero. 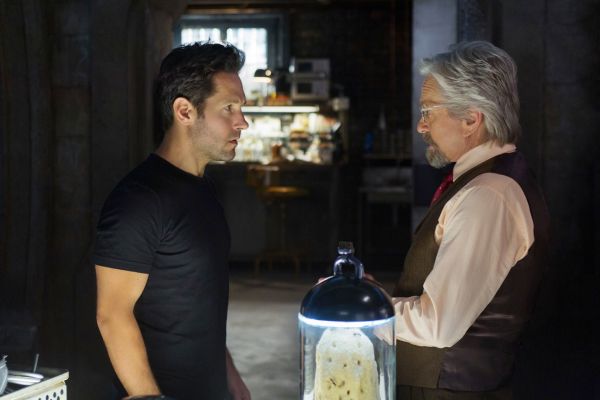 Anyway, Pym’s protege turned nemesis, Darren Cross (Corey Stoll of “House of Cards”) has invented his own weaponized version of the Ant-Man technology, the Yellowjacket, and plans to sell it to the highest bidder. So Pym and his skeptical daughter Hope (Evangeline Lilly) plan to train Scott to use the Ant-Man suit to break into Cross’ facility, steal the Yellowjacket suit and cause all kinds of mischief.

Mixing the traditional elements of a superhero origin story with the beats of a heist film, “Ant-Man” doesn’t veer too much from the structure of a typical Marvel film. But it’s what it does with that structure that makes “Ant-Man” so much fun; the action scenes are zippy, colorful and often gleefully silly, Ant-Man hopping around like a Mexican jumping bean as he fights the bad guys, or riding astride a flying ant into battle. There’s also a hilarious fight with an Avenger who makes a surprise cameo, Scott apologizing profusely (“You seem like a really great guy!”) with every blow.

Perhaps to balance out the inherent ridiculousness of the concept, the non-action scenes featuring a full-sized, unsuited Scott feel more grounded than in your typical superhero film, Reed taking time to establish the characters and their relationships to each other. Rudd is a natural comedic actor, of course, but I don’t think he gets a genuinely funny line in the film, instead relying on his reaction shots and low-key delivery to get laughs.

Ant-Man will eventually get sucked into the complicated Marvel Universe (he’s in the upcoming “Civil War” films), so it’s best to appreciate the small but considerable charms of his origin story now.