Why isn’t “Zero Motivation” a TV show? I don’t intend that as a diss, although I wasn’t that taken with Israeli writer-director Tayla Lavie’s debut film. But the movie clearly yearns to be a workplace comedy dramedy like “The Office” or “Orange Is the New Black.” It’s even chopped up into three discrete 40-minute episodes — um, “stories.”

Lavie drew on her two years of mandatory military service in Israel as a secretary to write “Zero Motivation,” looking at the humdrum lives of REMFs in the military’s Human Resources Office. While the male soldiers get to make plans in the War Room, the women bring them coffee and snacks, file paperwork, and play Minesweeper to pass the time.

There’s some smart black humor here, such as the petty power struggles of the women in the office, or the iron-fisted rule of their senior officer, who seems to get more authoritarian the more meaningless the task at hand is. There’s also a running joke involving how coveted staple guns are in the office that pays off big in the third act. At its best, it’s a wry mix of “M*A*S*H” and Madison native Jill Sprecher’s “Clockwatchers.” 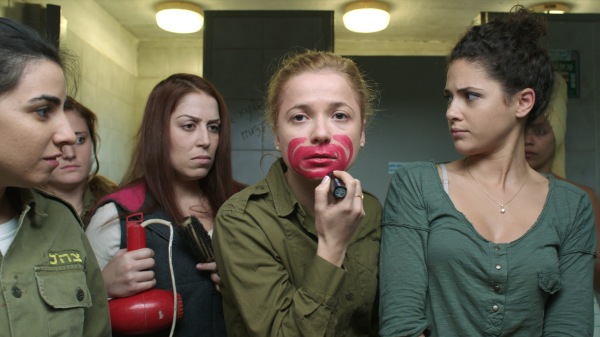 But rather than sort of hang with these women and tell their stories of boredom and disillusionment organically, Lavie gins up crises in each of the three episodes. In the first, for example, we learn that the young recruit in the office is really an imposter, an unstable woman who has infiltrated the base in order to be nearer to an old boyfriend. When her subterfuge is discovered, she resorts to drastic measures.

In this as in other moments of the film, Lavie lets the tone veer wildly, from comic to horrifying. These are tricky emotional turns to pull off, and “Zero Motivation” never coheres into more than a series of office skits with occasional moments of pathos. With the exception of the senior officer (Shani Klein), an initial comic foil who is revealed to be a more nuanced figure, none of the characters get to develop much. As drab as their uniforms, they simply sit around, bored, waiting for the next plot point to liven the film up.