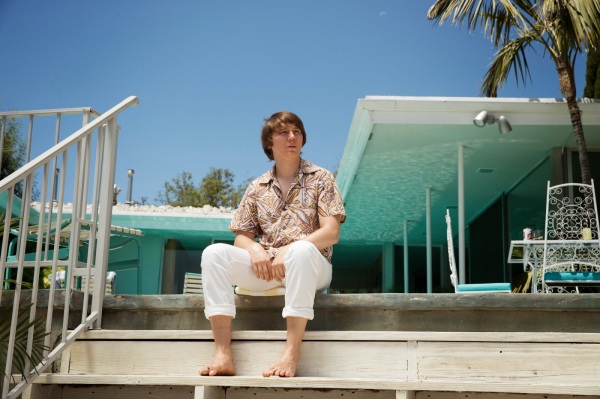 For an extra few bucks, theaters showing the Brian Wilson biopic “Love and Mercy” should issue headphones so audience members could jack in directly to Atticus Ross’ hypnotic soundtrack. (And I don’t mean earbuds, but big, fat, pillowy, quad headphones.)

Ross and Trent Reznor have made memorable soundtracks before for films like “Gone Girl” and “The Social Network,” but what he creates for “Love and Mercy” is more like an aural soundscape, with snatches of Beach Boys music and whispers of sinister voices floating around in the ether. Hearing it helps us understand the beauty and the nightmare of being in Brian Wilson’s head.

That’s the main purpose of Bill Pohlad’s empathetic and ambitious film, to try to give the viewer a feel for what life for one of the 20th-century’s greatest (and most troubled) pop music composers has been like. To that end, Pohlad’s scraps the traditional “Behind the Music” arc of the traditional musical biopic for something riskier, more intuitive, and much more deeply satisfying.

To that end, Pohlad cast two excellent actors to play Wilson at different points in his life, about 15 years apart, and glides back in forth in time between them. The result is disorienting by design, but gives you the sense for how the past, for Wilson, was both a vast distance away and all around him. When a Beach Boys song comes on the radio, he politely asks for it to be turned off, as it “kind of destroys my brain.”

We see how that brain was destroyed in the earlier sections featuring Paul Dano as the young Wilson in the mid-1960s, starting to grow bored with the Beach Boys’ endless summer hit parade. He begs off another tour to squirrel himself in the studio with some session musicians to work on the tracks that became the landmark “Pet Sounds” album, including “Wouldn’t It Be Nice” and “In My Room.” The recording session scenes are thrilling, as Wilson seems utterly relaxed and in command as he pulls in all kinds of instruments and all kinds of sounds (“Can we get a horse in here?”) to recreate the symphonies in his head.

The session musicians are amazed, but Wilson’s fellow Beach Boys are confused and unamused, with Mike Love (Jake Abel) grousing that the songs don’t have that “Beach Boys fun.” Also disapproving is the Wilson’s father Murry (Bill Camp), an abusive father who the band fired as manager, leaving him to seethe with disapproval in the wings. Rattled by “Pet Sounds” commercial failure, Wilson surges forward with the “Smile” sessions, but the constant pressure pushes him to the breaking point, and “Smile” is abandoned. Instead of symphonies, he hears voices in his head, and descends into LSD-fueled mania.

The film’s second strand shows a middle-aged Wilson post-breakdown in the 1980s, now played by John Cusack as a guileless man-child living under the thumb of therapist and spiritual guru Gene Landy (Paul Giamatti). Landy is a nightmare in tennis whites and floppy hair, sponging off Wilson’s riches and screaming at him if he dares to even eat a hamburger without Landy’s approval. But Wilson wriggles out from Landy’s gaze long enough to meet a beautiful car salesman, Melinda (Elizabeth Banks). As Melinda falls for Brian and learns about his horrible circumstances, she becomes resolved to rescue him from his emotional prison and restore him back to some sense of self.

“Love and Mercy” twins the downward slide of Dano’s Wilson with the upward struggle of Cusack’s in deft and resonant ways; a scene of Dano smiling beatifically in the control room during the “Pet Sounds” sessions is followed by Cusack’s Wilson, his mouth twisting downward as he struggles to play a simple ditty on the piano. I think Dano does the better job of inhabiting the Wilson we know, the baby face and the soft voice. But Cusack’s unguarded performance is what really gives the film its emotional power. Both performances are essential.

“Love and Mercy” tells of an essential chapter in rock history, to be sure, but it tells it through a very painful, personal story. I saw Wilson perform the completed “Smile” at a triumphant Madison show a decade ago, and I was delighted to hear Wilson’s vision finally fulfilled. But mostly, like everyone else there, I was just happy to see him looking so happy, at last.