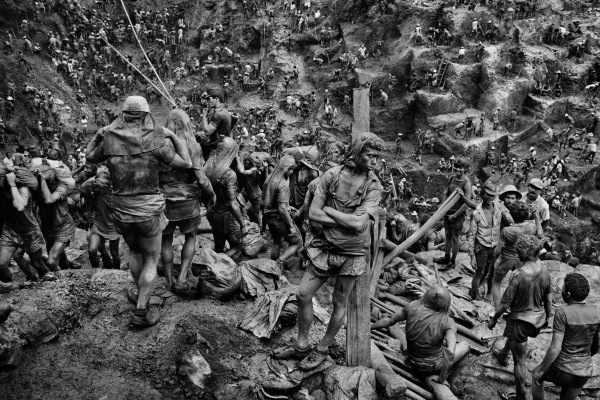 “The Salt of the Earth” opens Friday at Sundance Cinemas. PG-13, 1 hour 50 minutes, three stars out of four.

You may have seen the photo. It’s a black-and-white photo of miners of Brazil’s Serra Pelada gold rush, hundreds of filthy men crawling across the pitted mountainside like ants, scrabbling for their fortunes.

The man who took that photo, Sebastiao Salgado, says he felt like he was witnessing the “dawn of time” when he took that photo. For 40 years, Salgado has traveled the world taking photos in places most would fear to tread, documenting famine, genocide, poverty, death.

Salgado came to photography rather late in life; he started as a political activist in his native Brazil, but eventually had to flee the country’s repressive regime. Unwelcome in his own land, he made other place on the globe his home, lingering in places like Rwanda during the genocides or Iraq during the original Desert Storm, capturing stunning images. Wenders makes the intriguing choice to have Salgado speak directly to the camera about the photos and to superimpose his face over top of them. “We humans are terrible animals,” Salgado said. “Our history is a history of wars.”

From Juliano, we get the sense of how hard it was to grow up as the son of a global adventurer. When we see father and son taking pictures of walruses in the Arctic Circle, Salgado literally using his son’s body as sort of a tripod to steady his camera, we get a keen metaphor for how family takes a back seat to the life of an artist.

The film ends with a look at Salgado’s Instituto Terra, an area of Brazilian forest damaged by rapacious development that Salgado bought, revived and turned into a national park. After witnessing so much death and destruction around the world, it’s as if Salgado put a small piece of the earth in a frame and devoted himself to not just documenting it, but fixing it.