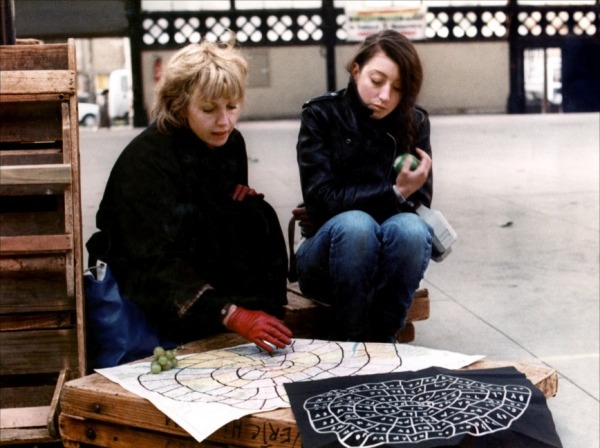 It’s a bit of a cliche to say that a city is almost a “character” in a movie, like how Austin is such a big part of “Slacker” or Manhattan is such a major part of, well, “Manhattan.” But Paris really is a character in Jacques Rivette’s trippy 1981 film “La Pont Du Nord.” And, quite possibly, it’s the villain.

Rivette’s film, sort of an existential noir and like almost nothing you’ve ever seen, was recently released on Blu-ray by Kino Lorber.

Marie (Bulle Ogier) is a middle-aged woman back in Paris after a few years in Prison for a bank robbery connected to a revolutionary political group. On the street, she runs into Baptiste (played by Pascale Ogier, Bulle’s daughter), a free-spirited woman on a scooter who see Paris as a labyrinth of mystery and menace. (It’s key to “Le Pont du Nord” that we’re never sure if Baptiste has some sort of psychosis, or if she is correctly sensing the presence of this “secret Paris” among the lion statues and movie posters.

Exploring the city, the women come into possession of some documents that one of Marie’s old confederates wants back, as well as a map of Paris’ 20 arrondissements with a spiraling series of squares drawn on them. It looks like a spiderweb, but Marie and Baptiste correctly see at as a game board. To survive, they have to travel the squares, dodge the traps (and the mysterious secret agents Baptiste calls “Maxes” that menace along the way) to get to the finish.

Rivette never tips his hand as to whether this game is real, or some sort of willingly shared delusion between the two women. As Baptiste says to Marie, “Don’t try to understand.” The joy of “Le Pont du Nord” is watching the women traverse the city (Rivette shoots only exteriors, and only in daylight), from ancient cobblestone streets to construction sites where old buildings are being torn down to make way for the new.

The women are traveling through a Paris in transition both physically and politically, a changing and dangerous game board for the unwary. While Bulle Ogier plays Marie as a very low-key, realistic sort of person, Pascale Ogier makes the role of Baptiste larger than life, a headphones-wearing, kickboxing dynamo who slashes out the eyes of fashion models on Metro posters. (Sadly, Pascale Ogier would die of drug-related causes three years later, at the age of 26, making her live-wire performance here all the more poignant.)

The Kino Lorber Blu-ray includes a solid essay by Dennis Lim, and two rather middling video essays, although one rather helpfully points out exactly where every scene in the film was shot. So the next time you’re in Paris, you can play your own game of “Le Pont du Nord.” Just be careful — it’s a magical city, but one that can swallow you up as as easily as those old crumbling buildings.