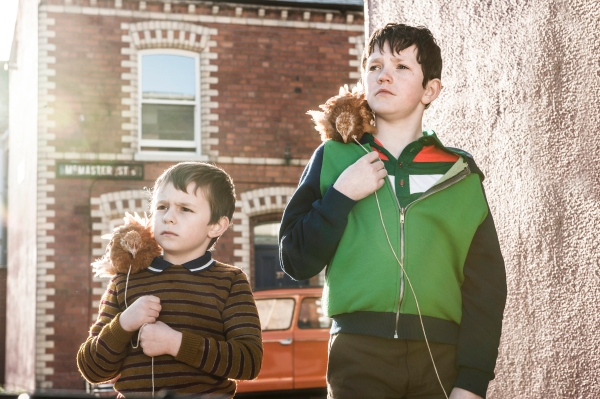 The “2015 Oscar Shorts — Live Action” open Friday at Sundance Cinemas. Not rated, 1 hour 30 minutes. Three stars out of four. I’ll be doing a post show chat at Sundance after the 7 p.m. show on Tuesday, Feb. 3.

From Belfast to Tibet, from London to Israel, the five short films nominated this year for an Academy Award for Best Live-Action Short are a mixed bag both geographically and dramatically. All five are now playing at Sundance (along the animation and documentary shorts), so you can decide for yourself.

In “Aya,” an Israeli woman (Sarah Adler) picks up a passenger at the airport, a rather aloof conductor (Ulrich Thomsen). On the drive into town, she badgers him into conversation, and it becomes clear that she’s not even his real driver, just a woman who on impulse decided to pretend to be.

The energy in “Aya” comes from wondering if Aya’s goals are sinister or friendly, then romantic or platonic. As these two very different people form a strange bond on the drive, the film is quite engrossing, even if the ending is deliberately elusive.

In my favorite of the shorts, Hu Wei’s “Butter Lamp,” a traveling photographer takes family portraits of Tibetan nomads, using scrims of famous landmarks (the Great Wall, the Dalai Lama’s old palace) as a backdrop. In the interactions with the families, we get glimpses into the lives of these nomads in a changing, globalizing world.

Hu shoots “Butter Lamp” as a series of static shots, like portraits, never moving the camera until the very end, until the backdrop falls and we see a glimpse of the real Tibet these people live in. It’s the most memorable shot of all five films.

In Britain’s “The Phone Call,” Sally Hawkins plays a crisis hotline worker who gets a call from an elderly widower (Jim Broadbent, only heard and never seen) who says he’s overdosed on anti-depressants. He doesn’t want help, he just wants somebody to talk to in his final minutes.

The acting between the two is wonderful, but unfortunately director Mat Kirkby tries to inject a note of phony uplift in the last two minutes that undercuts the hard work that’s come before.

In “Parvaneh,” an Afghan teenager working in rural Switzerland befriends a privileged Swiss teen while trying to send money home to her family. While the friendship strains credulity, This is yet another film in which two unlikely souls meet and bond together, and the friendship that develops between the two is genuinely poignant.

Finally, the only film that comes near comedy is “Boogaloo and Graham,” and it’s set in 1978 Belfast. Two boys gets chicks as pets from their father, and are intensely devoted to the two birds to the point that they forget about the political strife around them. The brothers are really funny, even if the introduction of “The Troubles” in the climax feels a little forced.

While ‘Butter Lamp” is my favorite, I think “Boogaloo” might have the edge among Oscar voters just because it does have that note of levity. But we’ll see what happens on Feb. 22.