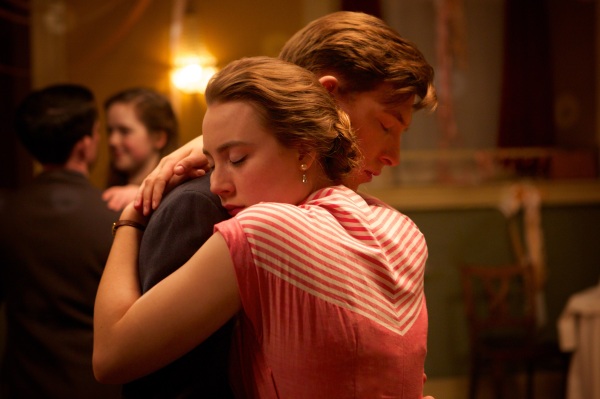 “Brooklyn” is not what one would term a “Sundance movie” by any stretch of the imagination. It’s a good-looking historical drama based on a well-regarded novel by Colm Toibin, adapted by Nick Hornby, and featuring a terrific cast and strong production values. There isn’t a speck of millennial angst in the film.

But it is a wonderful film, and if it expands the definition of a Sundance movie, so be. So moving and keenly perceptive about life, faithful to its time in details but contemporary in its feelings, “Brooklyn” is a movie that should make a big splash once it leaves Park City. I was describing it later in the day to someone who hadn’t seen it. And I gave HER chills.

Saoirse Ronan is just magnificent as Eilis Lacey, a teenage girl who leaves her small Irish town in the 1950s to emigrate to America. Director John Crowley gets the period details right, but more significantly he gets the emotional details right of leaving everything you’ve ever known before.

This isn’t a hard-edged “The Immigrant” sort of tale, but a gentle one. In America, Eilis feels desperately homesick, out of step in a city that’s louder and faster and bolder than she is. But people help her, especially older women who know what she’s going through — there’s a very subtle but strong through-line in the movie about the value of women looking out for each other.

Eventually, she meets an Italian plumber, Tony (Emery Cohen) who courts her respectfully and affectionately. We keep waiting for him to be a bad guy, but he’s as decent as they come. Just when Eilis is starting to feel like she belongs in this new country, a family tragedy takes her back home to Ireland. And once she’s there, around family and friends and familiar sights, she feels the pull of her old home again.

“Brooklyn” might be very much a companion piece to “An Education,” also penned by Hornby; both films follow a young woman’s progression from innocence to experience, and the hard but necessary choices she has to make in order to move forward.

The supporting cast is strong, including Jim Broadbent as a kindly priest who helps Eilis along, and especially Julie Walters as a flinty landlady who keeps the women in her boarding house in line with a firm but wry touch.

But this is Ronan’s show. Her career from “Atonement” on has been building to this kind of magnificent lead performance; Eilis is innocent but not naive, strong but vulnerable, and Ronan captures all the complexities of her. There are scenes, as when Eilis is watching her town’s Saturday-night dance for the last time before she leaves for America, and Crowley just holds the camera on her face for almost a minute. And she tells you everything, everything you need to know without saying a word.

The film got standing ovations at both of its screenings at Sundance’s big Eccles Theater, and Ronan was wiping tears from her eyes. She wasn’t alone; audience member after audience member stood up and told about their own immigrant story, whether it was a young man moving from Turkey to German, or someone’s parents coming from Ireland in the 1920s.

“It’s everyone’s story,” Ronan said. “Everybody leaves home at some point in their lives. I went through it around the time of shooting. It was tough and it was amazing and made me grow up an awful lot.”