For some reason, whether it’s because it’s an especially big issue in France or because the French are particularly interested in their national identity, recent French cinema seems to be dealing with immigration a lot lately. Whether it’s in a thriller (“Cache”), social drama (“The Class”) or even heartwarming comedy (“The Interrupters”), the clash between Old World and New World French seems to provide endless inspiration.

Robin Campillo, who wrote “The Class,” goes even deeper on the subject for his debut as a writer-director, “Eastern Boys.” The film flirts with being a thriller in its first and last half hours, but it’s really a sobering look at the relationship — sometimes symbiotic, sometimes mutually exploitative — between established French and newcomers from Third World countries.

The lengthy opening sequence is an almost documentary-style overhead look at Paris’ Gare du Nord train station. As we focus in, we see a group of Eastern European teenage boys who move confidently among the crowd, dodging security guards, sizing up distracted passengers as potential pickpocket victims or prostitution customers. They move largely unnoticed by the throngs of people embarking and disembarking, a potent metaphor for how they move through French society.

One Frenchman is paying attention, and that’s Daniel (Oliver Rabourdin), a 50-ish businessman with the aloof watchfulness of Kevin Spacey. He zeroes in on one of the teens, who calls himself Marek (Kiril Emalyanov). They chat, and Daniel asks Marek to come over to his apartment tomorrow. 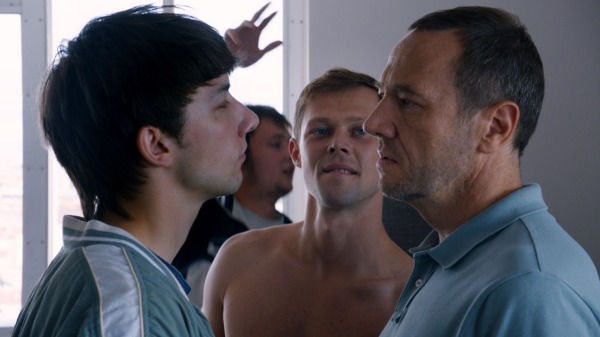 But when the doorbell rings, it’s not Marek, but a dozen of his friends, led by the unnervingly calm Boss (Danil Vorobyev). The crew makes itself at home in Daniel’s luxurious apartment, playing loud music, sizing up his property to be sold on the black market. It’s an unnerving sequence, as we’re not sure how much danger Daniel is in, and for a little while we think “Eastern Boys” will be a home-invasion thriller like “Dangerous Hours.”

But the teens soon leave, taking most of everything Daniel owns with them. The next day, the doorbell rings again. It’s Marek.

Where Campillo takes “Eastern Boys” next I won’t give away, except that the relationship between Daniel and Marek remains both uncomfortable and compelling. Who’s using who? Is the relationship merely sexual, transactional, with Daniel using Marek for sex and Marek using Daniel for cash? And are any feelings built on top of this arrangement legitimate, or just an outgrowth of mutual exploitation. Campillo lets the film hang in that uneasy space as long as he can, making us question his character’s motives.

The film’s final turn into a straightforward thriller in the last half-hour is suspenseful, but a little disappointing given the emotional layering that’s been built up before. Still, Campillo has an eye for the telling detail of life in a society of the exploiters and the exploited. The day after the teens leave Daniel’s wrecked apartment, he calls a cleaning lady to come over. She’s another immigrant, of course.