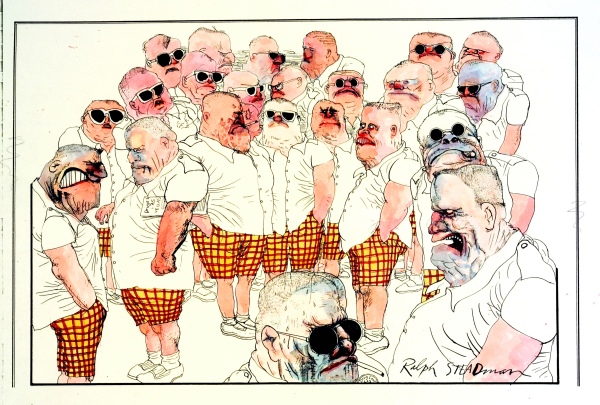 “For No Good Reason” opens Friday at Sundance Cinemas. R, 1:29, two and a half stars out of four.

Ralph Steadman doesn’t look like the sort of man who has nightmares. An almost cuddly-looking elderly British man, Steadman looks like he should be teaching calculus or running a bookshop in the West End.

But out of his fingers have poured some truly nightmarish visions. Steadman was an illustrator for Rolling Stone for many years, creating grotesque images of Richard Nixon and others. These weren’t mere caricatures — the moral darkness that Steadman sees in his subjects seems to erupt out from within, distorting their features into gargoyles of fear, rage and greed.

Steadman may be best known as the sidekick for Hunter S. Thompson, feverishly penning illustrations of Thompson’s sojourns to Hawaii and Zaire, creating the mythical “Duke” cartoon character with the cigarette holder and broken sunglasses. The documentary “For No Good Reason” is most interested, understandably, in this collaboration, but it also properly puts it in the context of Steadman’s larger, influential body of work.

Johnny Depp, who seems to appear in every Thompson-related project, is shown visiting Steadman’s studio, and interviewing him for director Michael Mierendorf’s camera. Some of the best moments in the film are simply watching Depp’s amazement at watching Steadman work, blowing paint through a straw to create a noxious green cloud around a figure. 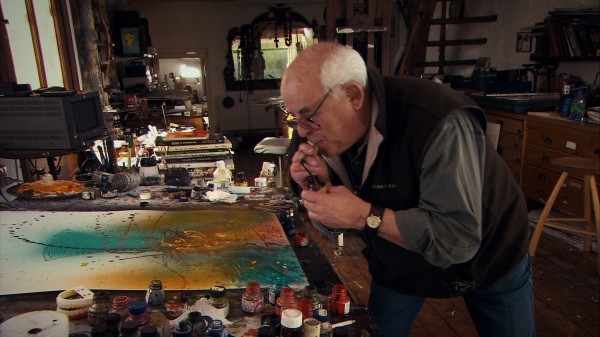 Steadman dismisses them as “tricks of the trade,” but that’s what’s so fascinating, seeing this nightmarish vision worthy of Heironymous Bosch appear before our eyes through patience and skill, craft becoming art.

Steadman enjoyably recalls his sojourns with Thompson — the artist refused to take drugs alongside the writer, and seemed somewhat distasteful about some of the Duke’s exploits. But Thompson was also a little afraid of Steadman, and the abyss he would gaze unflinchingly into in his work. Steadman’s real inspiration, though was Nixon, and he felt his artwork acquired its moral purpose in seeking to “change the world” by exposing the real man via caricature.

Unfortunately, the filmmaking in “For No Good Reason” simply does not live up to the subject. Mierendorf at times insists on a needlessly cluttered frame, with pointless visual tricks like cutting between different versions of Steadman telling the same story, or projecting Rolling Stone editor Jann Wenner’s interview on a copy of the magazine.

But most mystifying is the decision to use an obtrusive soundtrack featuring wan pop-rock singers like Tristan Prettyman and Jason Mraz, which doesn’t fit thematically at all with the dark places that Steadman’s work goes. Steadman’s illustrations could burst with baroque details, but one thing you would never call them is “busy.” They had a focus, a mission, that “For No Good Reason” often lacks. Still, if you can see through the mess, the film offers enough of a tribute to a great artist of his time to be worth watching.