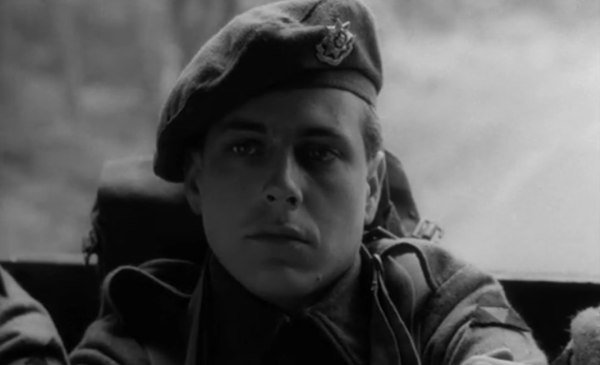 Is every war movie an anti-war movie? Many think so — Tom Hanks once said in an interview that he hoped that, by the end of “Saving Private Ryan,” the audience will hope it never sees one person shoot another person again. But then again, maybe ever war movie is a pro-war movie too, as it’s so hard not to get caught up in the characters’ struggle, to feel a visceral if awful excitement as Capt. Miller and his men fend off the Germans. It’s a mixed message – war is wrong, but warriors are heroes.

Stuart Cooper’s “Overlord” may be the rare film to escape that contradiction, more striking because it’s a film about World War II, universally accepted as our “just war.” Cooper blends experimental narrative filmmaking with a heavy dose of archival footage to achieve a versimilitude of the wartime experience that’s hard to equal. Although it won the Silver Bear at the Berlin Film Festival in 1975, the film never found a U.S. distributor, perhaps because neither pro-war nor anti-war audiences could quite embrace it.

Its savior was Jerry Harvey, the film lover who ran Los Angeles’ notorious Channel Z movie channel, aired it and championed it. It got picked up for distribution by Janus Films, and is now out on a Blu-ray from the Criterion Collection.

To see how different “Overlord” is, consider that the film ends right at the moment when “Saving Private Ryan” starts, when the troop transport ships are about to disgorge soldiers into the hellfire that is Normandy. Instead, Cooper shows us the moments leading up to that one, as young Tom (Brian Stirner) enlists for service. From the beginning, we see Tom’s premonition that he will die on the beach. But he goes anyway, and the film is meticulous in showing the steps that lead Tom to that beach, the rigor of basic training, the boredom of waiting to get called into action, the fear that he is marching to his own death.

These rather contemplative scenes are intercut with some fascinating archival footage from both British and German filmmakers, as we see the vast war machine (including some truly bizarre, almost fanciful contraptions I’d never seen before) grinding into action. The Imperial War Museum worked closely with Cooper to get the right footage for the film, the only time the institution has worked on a fictional film. The contrast between these vast forces we see in the archival footage and our small, confused Tom is striking; as he writes in a letter home: “The war machine keeps getting bigger and bigger, while we get smaller and smaller. Until we disappear.”

It’s an odd and very personal perspective on war, the soldier almost disconnected from the war he’s fighting. Tom is certainly disconnected from combat, spending nearly the entire film sitting around the barracks or in movie houses, a part waiting to be used. He only enters combat in those last few minutes on D-Day, in Operation Overlord. Whether his eerie premonition comes true I’ll leave for you to see, but the film leaves you with a quiet, respectful grief at the plight of this one small soldier, lost in the machine.

Cooper participated extensively in this Criterion edition — the disc includes an informative commentary by Cooper and Stirner, and Cooper oversaw the high-def digital transfer of the film. Also included is some of the original documentary footage that Cooper appropriated for his film, including the propaganda film “Germany Calling.” My favorite, though, is a photo essay of the work of war photographer Robert Capa, whose blurry, surreal shots of the Spanish Civil War and of D-Day inspired much of the visual look of “Overlord.”