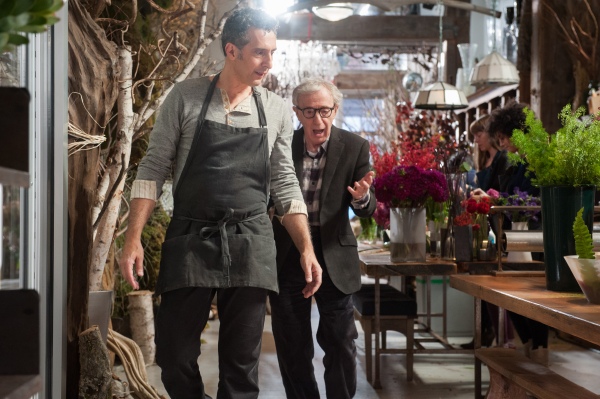 There ought to be some kind of asterisk required on reviews of movies shot in New York City in autumn. Even the worst movie can seem pleasant enough when you see those leaves dappling the stoops of a row of brownstones, or people in expensive coats walking through a golden Central Park. There’s one scene in “Fading Gigolo” set in a glade in Central Park, the trees every gorgeous shade of red, yellow and orange imaginable, that looks like a CGI painting from “The Hobbit.”

This is not to say that John Turturro’s “Fading Gigolo” is a bad movie, but the setting definitely makes a rather thin film much more pleasurable to watch. A busy character actor, Turturro has been moving into filmmaking in the past few years with the musical “Romance & Cigarettes” and the delightfully nutty musical documentary “Passione.” “Fading Gigolo” feels like a safer, more cautious bet for Turturro as a filmmaker.

Turturro plays Fiorevante, a Manhattan florist who has been friends with bookshop owner Murray (Woody Allen) ever since Fiorevante tries to rob the store as a teenager. Now Murray’s little bookshop is closing, and he has a wife and four adorable kids to support.

And here comes the premise. Murray thinks there’s enough women of a certain age in New York City who will pay to have sex with a man like Fiorevante. So how’s about if Fiorevante takes a side job as a male escort, with Murray acting as his — let’s just say it — pimp?

It’s a silly premise, made sillier by the fact that Turturro doesn’t seem to think it’s silly at all. Turturro is not unattractive, but he certainly has a distinctive look that might not be to every woman’s tastes. (And he’s aware of that — in one funny moment he refers to his proud nose as “purely decorative.”) And yet his clients are all stunningly beautiful women; the male escort subplot turns on Fiorevante setting up a three-way with Sharon Stone and Sofia Vergara for $2,000. That’s $2,000 that they’re paying him!

The film is at its best in those scenes, and otherwise surrounded by a lot of fluff, including Liev Schreiber as an Orthodox Jewish neighborhood watch officer who has a crush on Avigal and suspects there’s something funny going on. Turturro bathes it all in golden light and adds an amiable jazz-piano score by Gene Ammons. Like Sharon Stone and Sofia Vergara, our time with “Fading Gigolo” is a pleasant enough experience, but I’m not sure we get our money’s worth.